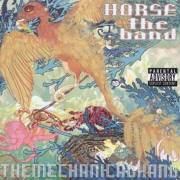 It’s time to dust off that old Nintendo or SNES and let’s play; “What Horse the Band riff is this?” With their sophomore release and debut album on Combat Records, Horse the Band has a lot to live up to after their first album R. Borlax. Their first album gave this band a cult following and defined the sound today better known as “nintendocore.” While on The Mechanical Hand the band certainly try to experiment more with the sound, they still stay true with their spastic guitars, quirky lyrics and keyboard riffs heard in all our favourite Nintendo games.

The album kicks off with a quick spoken word clip and drums leading up to an explosion of nerdy chaos. The first track “Birdo” gives an insight of what the album will soon become, yet sadly this comes out as one of the better tracks on the album. Chalk full of fast, almost punk, guitar riffs followed by heavy breakdowns and lyrics teaching you how to beat that pesky gender-confused, egg throwing bird off of Super Mario 2.

Throughout The Mechanical Hand, the mood of the album seems to change faster than I can change a pair of pants. Going from songs like “House of Boo” where your gut caves in from carried out breakdowns (also heard on “Taken by Vultures”) to “Manateen” that has a keyboard riff that sounds like Lionel Ritchie is making a guest appearance. Two instrumental tracks also appear that set a certain feel to the album which helps keeps the jumbled mess of math-core together.

With the perfect mix of heavy metalcore like breakdowns, fast guitar riffs and 80’s pop sounding keyboards that reminds us all of our gaming days The Mechanical Hand certainly proclaims itself as the perfect party album. Now on the topic of Nintendo, a bet to see who can get to world 5 in Super Mario as fast as I can, anyone?  [ END ]