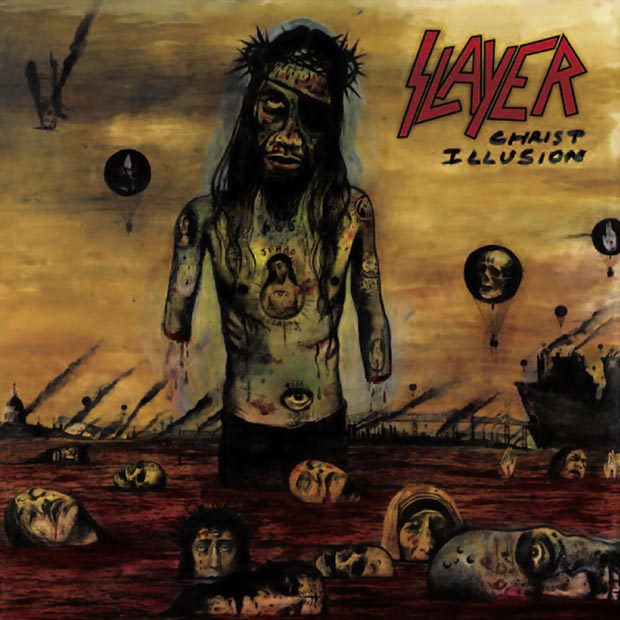 When you look back on metal, and all its denominations (heavy metal, thrash metal, speed metal etc), only about a handful truly stand out amongst the rest. Take for example Metallica, Megadeath and Anthrax, and Slayer aka “The Big Four.” Slayer is one of those bands that have made a lasting impression on the metal scene and will continue to do so most likely forever.

If you are into double bass pedaling, screaming vocals, and some tremolo picking than this is an album you’d want to pick up… NOW! New fans of the band (what? You’re not a fan already?) will think this album is the shit, but little do they know that their previous releases especially 1986’s Reign in Blood, is the album that put them on the map. Go check out their early stuff!

Just as a brief side-note, this album is the first album since 1990’s Season in the Abyss that features the original line and the return of drummer Dave Lombardo.

Back to la musica! It’s loud, in your face and just oozes creepyness via their lyrics. Although Slayer sparked controversy with their lyrics and their strong talk about Satanism and other similar topics, their fans can’t seem to get enough.

Lyrical content on Christ Illusion includes politics, religion and hate. Tom Araya’s vocals are throatier, full, and intense, while Kerry King’s guitar skills are infallible. The album as a whole is very strong, and loud. It’s classic Slayer. At the end of the day this might not be their best album ever, but it’s hard to top yourself, when you are already at the top!

Slayer is back, but they never really left either! This album will stomp the crap out of you. 8.5 times over!  [ END ]