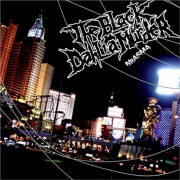 The Black Dahlia Murder did an amazing follow up to their previous album Unhallowed. The new offering was released on July 12th 2005 on Metal Blade Records and is entitled Miasma.

The new album from this Detroit, Michigan band is a huge step in the right direction. The new album is still brutal and heavy, but offers a great melodic twist that Unhallowed didn’t quite have. It’s more of a mainstream kind of Black Metal, but it is great for any true metal fans out there.

The band has really shown a lot of growth on this release. Getting a new drummer in the band has proven that some dramatic changes were made in the song writing process, but it works. This album surpassed all my expectations after hearing their first release.

The main thing that really stands out for me on this album is the insane guitar work. The guitars sound brutal on the new record; possibly the best guitar work I’ve heard in a long time from a Metal band. They appear to be harmonized all the way through most of the album. Miasma truly is something worth checking out if you’re just a fan of some great guitar work. Brian Eschbach and John Kempainen are almost god-like on the guitar.

Trevor Strnad’s vocals also appear to have matured into something much better. You can really find the band shaping up into a mold of what they will be a couple albums from now. The drumming is also a lot more solid. I think the addition of the new drummer seems like a wise move on the band’s part.

Miasma is for sure one of my picks for top 5 Metal albums in 2005. The Black Dahlia Murder are trying to make a huge name for themselves in the Black Metal world by kicking every other band in the collective asses. I’d also give this record most brutal album of the year by far.

Vocalist, Trevor Strnad says; “Much of the content here is a direct result of our experience in the band.” With that being said, you know the band is still experiencing life on the road and since they are all in their early 20’s there will be much more experience and music to come. Strnad also states; “I feel that we are yet to reach our prime, but Miasma is many steps closer to where we want to be.” I cant wait to see what the future holds.

The Black Dahlia Murder seem to own the Black Metal/Death Metal scene and this album proves it. I am positive their next CD will be nothing short of legendary for the whole metal community, and these guys will continue to rise up and prove themselves.  [ END ]