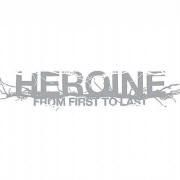 From First To Last

Wow Epitaph sure dished out the printing costs for the liner notes, silver is mucho expensive! It’s oh so pretty and I like the embossed sleeve it comes in over the CD case.

There was a lot of hype last year around FFTL, and with such cliché titles as “Dear Diary, My Teenage Angst Has A Body Count” how can there not? But it’s all in good fun. And I bet all you haters are closet fans that’s right, I said closet fans, you diss them, yet you lurk their Myspace page to hear their songs and you secretly wish to wear eyeliner.

It’s hard to up an album that hard great success and Heroine does that in a different way… the musical elements have changed making them faster and harder. Vocally, Moore has grown, and with every album he can only get better. Moore lyrically reminds me of a pre-pubescent Burt McCracken.

Wes Borland supplies his musical abilities for the whole album on bass, while Epitaph founder Brett Gurewitz adds additional vocals on “Mothersound” the lead off track of the album, which explodes, like a metal core outfit bought from Hot topic.

Ok, so word on the street is that From First to Last are a trendy band, the music is in style, making them in style. Well that’s what’s been said about the previous album, so this time around, they are letting you know that they were cooler before the trend and it’s going to take a few more emo insults to take these youngins down.

This album had a bigger budget in the studio, I’m assuming hence the different representation it demonstrates production wise. Ross Robinson who has produced such acts as Slipknot and Korn lent his hand to this album, worked his magic, and probably pushed the young musicians as hard as he could. But this album as a whole doesn’t have the same hook capabilities as the last album had. That’s okay in one sense, because you can’t write the same album twice; they are still pretty new to the scene so they are going to have a few goes at it. And with Epitaph backing them up, I’m sure good things are to come, although some people have wondered what ever happened to the good old non jumping on the bandwagon Epitaph.

“World War Me” has some pretty sick harmonies. I don’t particularly like the vocals on it but musically it rocks and is entertaining. “”The Crows are Coming for us” starts off with singing, and then the usual screaming; I rather enjoyed the singing part. The song breaks into a climax that is indescribable.

Towards the end of “The Levy” you hear an old Gregorian chant like opera if you will, which ends the song pleasantly and beautifully.

“Waves Goodbye” might be my favourite track off the album because of the lack of screaming; I can actually make out what he’s saying, (I didn’t say I wanted to make out with him Aaron, who likes to comment on my taste of rock dudes). It’s a slow paced song and the words, “you danced between my toes” will definitely resonate with you.

Heroine, your either addicted to it, or it will kill you. You be the judge, but you have to give this album a fair listen. Don’t look at the gruesome cover they graced Alternative Press with, or their image, or the thousands of teenage Goth girls who like them, keep an open ear… you might be surprised. And stop with the makeup comments, guys in eyeliner are hot!