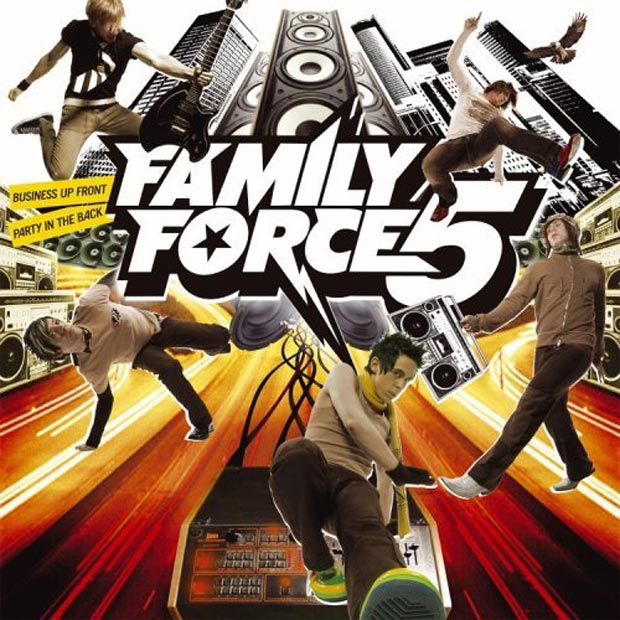 Nothing amuses me more than when you can tell a band has oodles of fun on an album. The first song I ever heard form Family Force 5 was “Love Addict” and you’ll still hear me coming down the hall singing, “Hold up wait a minute put a little love in it”. Why? Because it’s the greatest sung line I’ve heard in a while.

So these guys are in a genre of their own called “Crunk Rock” and are of a Christian rock outfit. Just like UnderOath, being a Christian band isn’t at all bad.

Take a look at the members’ names. Vocalist Solomon Olds (aka Soul Glow Activator), Jacob Olds (aka Crouton) on drums/vocal, Joshua Olds (aka Phatty) on bass/vocals (twin brothers), Nathan Currin (aka Nadaddy) on keyboard and Derek Mount (aka Chap Stique) on guitar. That right there should make you pick up the album. Twin boys, drool. (Aaron that’s another hit on you).

Ok kidding aside, no wait, one more thing, the logo on the back of the CD is pure grill style, genius!

The album is high energy. Reminds me of Red Hot Chili Peppers on “x-girlfriend”, I can only imagine how stellar this band really is live. They lyrics are parent friendly, but who cares about parents and what they like, just kidding, back in their day music wasn’t so band.

There is so much energy and fun the album infuses that you can’t help but want to get up and dance like a dorkus. FF5 have this way of delivering what’s new and current and what’s retro in such a humorous way. This album is fresh and straight out of Atlanta, Georgia, now why can’t bands like this get airplay? In any case, I know my brother might dig this band because of the track “Drama Queen”. Why you ask? Because it sounds as if the makers of “Diamond Girl” got their hands on this, and if you don’t know of that song, well it’s a freestyle song.

I mention “Love Addict” because it is the best song on the album to me anyway. The synth, the vocals, the breaks, pauses and computerized sounds make this a hit. I almost hear some Missy Elliotness in it. Lyrically you would never guess it was about God.

“Replace Me” is a song I could hear on an Atticus comp, well that might be stretching it, but it’s a classic pop punk rock sound, it has all the elements there. The breakdown is a rap, which is entertaining.

Lyrically it isn’t as pleasing as a Bad Religion album is to politics, but you really can’t have a vibe and sound like this with serious lyrics.

The compiled disc is so catchy and so ferocious your preacher will be crunking to it at the pulpit. And if Nelly and his country grammar was fun, Family Force 5 is way better at their lingo with “Kountry Gentleman”.

Funk and fun, these guys are pure entertainment, and according to some reports their live performance isn’t to be missed. Ghetto rap, funk, punk rock and hip-hop all in one album is plenty to keep you busy for a while. Pick this one up if you’re a fun loving kind of person. You’ll either like the album in its entirely or hate it, and if you choose the later, you’re missing out. Their thank you’s are hilarious. Nuff Said.