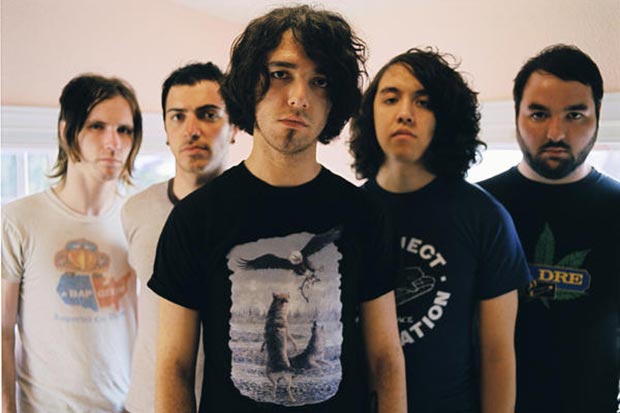 Picture it… Outside the Opera House on Queen Street in Downtown Toronto, there is a white van parked off to the side of the building. Inside this van sits two unsuspecting members of a hardcore band out of Tucson, AZ. The band? The Bled. The members? Bassist Darren Simoes and guitarist Jeremy Talley. What happened in the backseat of this van? A sweet interview with Darren an Jeremy where they disclosed info on pre-show stretching, song-writing strategies, and their future plans.

In your biography on the site, Mike Pedicone was quoted saying, “We all pretty much grew up together in Tucson, and we all played in different bands together throughout the years.” So what made you all decide to form a band together?
Jeremy: Well yeah, we all grew up in Tucson and we all played in various different local bands and our bands would always play shows with each other, so we made friends with each other like that. Once those bands started deteriorating and breaking up or whatever, and when we started The Bled, we just sort of picked members from those bands we had played with… people that we got along with and clicked with and went from there. It started out as just friends from bands, just to see if it’d work, and to see if we had chemistry. So that’s just how we met each other basically. The Tucson scene at that time really wasn’t big at all. It was super close-knit and tiny; all the bands knew each other, everybody knew each other…. So yeah, when those bands broke up, we just kinda knew who we would get along with and wanted to try it, and it just kinda evolved into what it is.

Other than The Bled, do you guys have any other jobs?
Jeremy: No, it’s pretty full-time. We tour 9 to 10 months out of the year, so we don’t have time for that. We’re only home for like, a week at a time, two weeks at a time, so we’re pretty much detached from our Tucson life. It’s just basically a place to sleep and stay in between tours now more than it is a home. Our home is… well, you’re sitting in it, y’know what I mean?

Do you guys have any personal preparation before a show, like, I don’t know… do you meditate, or have a lucky pair of polka-dot boxers that you put on?
Darren: No… we just stretch so we don’t hurt ourselves.

Jeremy: Yeah, we stretch a lot.

Darren: Maybe, I don’t know, if we wanna loosen up, just have a few shots or something… I’m just kidding.

How do you guys feel about touring with Protest the Hero, considering they’re pretty much just hitting the mainstream?
Jeremy: They’re awesome. We like touring with all these bands. They’re young dudes and good musicians and it’s cool to kinda have that different element on the tour. Also, for a full US tour, I think it’s their first full US, so that’s exciting to watch a band on their first full US, y’know?

Darren: It’s helpful that they’re cool, real nice guys. We get along with them really well. We never had any problems with them, and it’s way more fun being on tours that all the bands are friends, or they make friends.

Jeremy: It makes it way easier. It’s way easier to be on tours with bands that you like as people than you do as musicians. Not that we don’t like their music by any means, but they’re just awesome dudes and it makes them comfortable to tour with.

Okay. When you guys come up with songs, or you’re improving your songs, do you prefer to practice as a band, or just by yourselves?
Jeremy: Both, I would say. Mostly we like to do it where maybe one or two or three people write together, and then when we have something solid, we take it to practice and kind of work on it. But usually we don’t get time to do that. We don’t even practice when we’re at home because we tour so much that we don’t really need to. Touring is practice.

Darren: And we’re never home a super long amount of time to kind of establish ourselves and get a place to practice. But, I mean, as far as riff writing, Jeremy writes a lot of the riffs, and then he’ll bring it to us and play it to us, and we’ll learn it on guitar or something and mess around with the structure of it and change it around, and we’ll all come together….

Jeremy: Darren and I are roommates together in the hotels at nights, and we’ll jam together sometimes, and Pedicone, our drummer, will learn it on guitar so he can get it in his head of how it’s going to go. That’s basically how it comes together. Then like, once we get enough to actually turn it into a song, then we’ll take it to practice when we have time to practice.

When you guys were growing up, what bands did you listen to and how have they inspired you?
Jeremy: That’s two different answers.

Jeremy: For me, my main one when I was growing up, playing guitar wise, was Metallica… hugely inspirational to me when I was little. That’s basically the band that made me wanna play guitar, and it’s also the band that, you can take one of their songs off their earlier records, and there’s so many different elements and different styles of music within one song that you can learn a lot of different styles of music just by learning one Metallica song and learning all the guitar parts for it. When they wrote those records, it was orchestrated. Their guitars were like… I don’t even know how to explain it. There’s so many layers to what they were doing, and if you learn each one, you’re learning various different styles of music and you’re getting comfortable playing all this stuff. So for me, it was definitely Metallica when I was younger and first starting out. And then it evolved from there into other music. It’s always evolving, it’s always changing and I’m always inspired by new bands and older bands and everything. It goes in waves I guess for myself. I don’t know.

Darren: For me I guess… well, when I was really little, I wasn’t really exposed to much music just cause my family wasn’t a very musical family. But I guess a band that did it for me was the Smashing Pumpkins, and their record Siamese Dream. The first time I heard that, it made me think, “I wanna rock like this.” It’s a fucking amazing record that just feels good and sounds good and… I don’t know. It’s so dynamic, and that’s pretty much what I started learning was Smashing Pumpkins riffs on guitar and stuff like that, and just kinda going from there. Trying to figure out random songs on guitar by myself and going from there.

What is the writing process you guys use when you write these songs?
Jeremy: Like we said, usually I’ll come up with the guitar riffs and I’ll teach it to one or two of the members, and we’ll piece it together little by little. Then once we have something solid that we can go off of, then we’ll take it into practice and mess around with the structure and the length….

Darren: Yeah, sometimes we’ll come to practice and work on something for a while and then we’ll just totally not be into it and just kinda trash it, take it apart, take a part from it or so and put it back together.

Jeremy: And we’ll make it into a different song altogether. I think one of our biggest strengths as a band is we’re able to trust our gut instincts and just know when something is flowing and something feels good to play versus when something is just kinda strained and it’s not working out or we can’t figure out where to go with it. We’re really good at figuring out right away what to do with it or what not to do with the little riffs to turn ‘em into a song.

Do you guys as a band have any long-term goals, like do you plan on touring maybe Europe or something?
Jeremy: Yeah, we’ve been to Europe a few times. Obviously we want to see the world, we want to do as much as we can with this band and right now things are awesome. If it never gets any better than this, I’m content with this. I’m having a great time. I always will hope for better and more, and I just wanna get better at what we do and keep meeting new people and having a great time, y’know? That’s the point of it. A lot of bands, I think, forget that the point of it is to have fun. It becomes so business-oriented that it kind of becomes… I don’t know, I think you should balance it out 50/50 with business and pleasure. If you tip the scales too much in one direction, things start to fall apart. I just wanna stay balanced and stay focused and keep having a good time and touring new places. I wanna be a better musician, always. I wanna keep growing and I wanna keep making good records.

Darren: I think we’re really fortunate and lucky to have us, as a band, touring and playing music as a full-time job.

Darren: It’s definitely something that I don’t take for granted. It’s probably one of the best things in the world. If it gets better, I mean, that’s great, but where we’re at now, I couldn’t really ask for more right now.

Jeremy: This is our job. This is what we do. We hang out and we play guitar or we play our instruments for 45 minutes to an hour every night and the rest… we hang out and meet cool people and we travel the world. We can’t ask for anything more than that, y’know? It’s awesome.