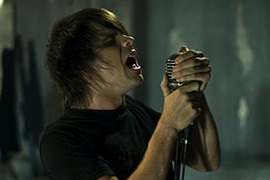 Another Silverstein interview? What? No, no it’s not. I mean, yes, it’s with Shane Told, and yes, he’s the frontman for Silverstein… but if you think that’s all this guy has to offer, you’re sadly mistaken. In addition to putting out albums and touring the world, Shane has also found the time to start up his own label, Verona Records. Yeah, exactly. You’re probably wondering the same thing I am… how does he do it? The simple truth is, the guy loves music, and a little love can go a long way. I chatted with Shane at Taste of Chaos 2006 and here is how it went.

As the frontman of one of the most famous bands to come out of Southern Ontario in a while, you’ve already had a huge impact on the Canadian music scene. What made you decide to take an extra step and develop your own label?
Shane: It’s something I’ve always wanted to do, and there was a couple bands in the area – specifically from Oakville – that caught my eye, and I just really wanted to help them out. Originally, the first band is called Dead and Divine, and they’re really young kids, really talented, but they just don’t have any direction. So I originally just started managing them, getting them shows, helping them out and kind of guiding them through the music business. Then I started talking to them and they were like, “Well, we want to put this record out, but we don’t know what to do and we don’t want to sign our life away…” and I was like, “Well you know what? Why don’t I put out that record?” So essentially I started the label just to put out their record, and we did that, and now we’ve just built it up. I’ve signed a couple other bands. So far they’ve all been local, Southern Ontario bands and I’m having a lot of fun with it and just helping out the bands the best I can.

Right on. Was it an idea that you had kind of toyed with before talking with these guys, or did they kind of inspire the concept?
Shane: Well, I definitely thought about it before but these guys kind of made me realize it and make it happen. I think if it wasn’t for the situation I had with Dead and Divine, I never would’ve actually pulled the trigger on making it happen – at least not this soon.

Yeah. So, you guys make a reference to Verona on “Your Sword Versus My Dagger” with the lines, “drink the poison when you think it’s over/Verona lives inside of you,” – obviously a Shakespearian reference. What relevance, if any, does that have in naming your label Verona Records?
Shane: Well, I was thinking about a name for the label, and if you do a search online for names of labels… everything cool that I thought of…

Was taken? [laughing]
Shane: Was taken. Even if it wasn’t already taken by a label, it would be a band name or something. So Verona Records wasn’t my first choice, but I think it’s cool because it’s something that, people that know me from Silverstein know that it’s a lyric, and I just like the name a lot. I think it’s got some sort of emotional impact and a little bit of a story behind it. It was also something that the guys from Dead and Divine were into. I asked them, I was like, “You got any suggestions?” They wanted to call it Capulet Records, which is the family – you know, Capulets and Montagues.

Yeah yeah, Romeo.
Shane: Yeah, so that was kind of lame, but…

It could have a lot of negative implications, too.
Shane: Well yeah, maybe. I just like the name.

Okay, cool. So how many bands are on the label so far?
Shane: Right now, three.

And they are…?
Shane: They are Dead and Divine, from Oakville, Dear Jane, I… from Toronto, and the newest is called the Stick-Up, and they are from Burlington.

Right on. I noticed on the Dear Jane, I… website, there’s kind of a Verona Records Eastern Canadian tour scheduled for the beginning of July I believe?
Shane: Yeah.

Is there anything after that where you’re planning on taking the bands touring the rest of Canada?
Shane: This is sort of a tour where… the reason it’s a Verona Records tour is because it’s Dear Jane, I… and Dead and Divine together. [laughing] It wasn’t something that I specifically planned out, but if I had my way, the bands would be touring all the time, right?

Yeah.
Shane: And that’s what we’re sort of going towards. The reason I started this is so that bands would be able to tour all the time and live on the road and stuff like I do, and I love it so I’m hoping that I can enable them to do that. I’m sure after July the bands will be touring all over Canada and the US, too.

So are there any plans to take them out with Silverstein and use your immense shadow to help them out?
Shane: Well, we’ve done that in a sense. We’ve put Dear Jane, I… on a show, and Dead and Divine played our CD release show – or, sorry, I mean our Christmas show. I know the Stick-Up is going to be playing a big show with us in the future. So that’ll work out, and when we do a Canadian tour finally, I’m sure we’ll help the bands out.

Right on. So do you usually approach the bands, or do they come to you and say, “Hey, listen to our shit. Help us out”?
Shane: It depends. There’s been a lot of bands that have approached me, and the only one that I really went… I mean, there’s only three, so there’s a different scenario for each one. It doesn’t really matter whether I approach them or they approach me. If I really dig the band, and they’re good people – which is very important – and they’re serious about what they do, then I want to help them out and I will do my best to.  [ END ]