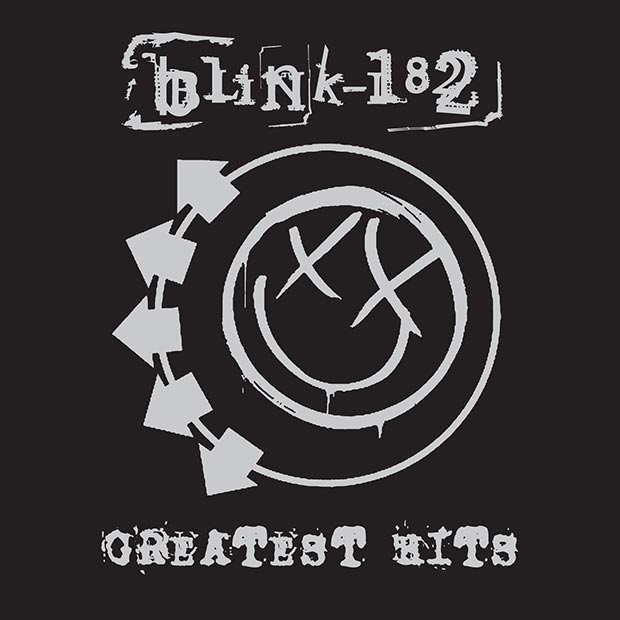 You’d think it’d be easy to write a review for a Greatest Hits album – especially for a band so prominent in the public eye, such as Blink 182. But it isn’t as easy as you’d think. I guess the struggle lies in not repeating things that have already been said a billion times before about songs that are played regularly on tons of radio stations around the world. Meh, to hell with it. If this review’s full of things you’ve heard before, then you can A) move on, or B) ask yourself… “Why am I reading this many reviews about the same album?” Maybe try both.

The album features 15 tracks off of the band’s past albums (plus two new tracks). It opens with the song “Carousel”, off of 1998’s Cheshire Cat. The song is true to Blink-182’s punk rock roots – cute little intro that breaks into fast-paced, chaotic guitar riffs that really consist of about three chords played over and over with tons of distortion. It reminds me of a band that used to play at my high school about six years ago (no names mentioned, of course…) They started out playing Blink covers, and then began to write their own Blink-esque songs – as did so many other bands around that time. Those were the days really. Well, those guys moved on and their music matured… same with Blink.

Also off of Cheshire Cat is track 2, “M & M’s.” I don’t really remember this song pre-Greatest Hits, but I like it. “There are only so many ways I can make love with my hand … Is this going to be the end / or are you going to be my new girlfriend?” Two words for you: Chick. Magnet.

Next are “Dammit” and “Josie”, off Dude Ranch. “Dammit” is the first song I really remember listening to by Blink-182… I think I had it on a tape somewhere, recorded off the radio. (I was just that cool.) “Josie” is another prime example of the band’s… uhh… unique writing style. Its lyrics are very romantic (while still being tough and punk rock-like, of course.) Who doesn’t want someone who’ll take them home when they’re too drunk to drive, or brings them Mexican food from Sombrero just because? Forget flowers and chocolates and diamonds and all that jazz… Being DD and buying tacos, that’s true live right there.

The band really went mainstream with their third album, Enema of the State, which is also the first appearance of the much-loved Travis Barker on drums. “What’s My Age Again?” and “All the Small Things” are both off this album, and they bring back fond (if not somewhat disturbing) memories. Particularly regarding the music videos. Those are the dirtiest moustaches of life, and my step-dad still has those shorts. (You know the ones I’m talking about… the too-small blue ones with the white stripe down the side and around the legs.) …And that’s all I have to say about that.

Also off Enema of the State is “Adam’s Song” – which is the first appearance of a serious song on the Greatest Hits CD; possibly ever. The song addresses the topic of depression and suicide, and I think it surprised a lot of people when it was released in 2000. Certainly took me by surprise, and to this day, it’s still one of my favourite Blink-182 songs.

The band’s next album, The Mark, Tom and Travis Show: The Enema Strikes Back, wasn’t as successful as the others, and so only has one track on this CD – “Man Overboard” – but the guys definitely picked up again with their release of Take Off Your Pants and Jacket. (It took me about a year and a half to finally comprehend that title. Not even joking.)

From there we move along to their self-titled album. I’m not really going to dwell on it, simply because, well, it’s all been said before. Quite recently too – the album was released at the end of 2003, so a little over two years ago. It contributes four tracks: “Feeling This”, “I Miss You”, “Down”, and “Always.” You can hear a huge maturation in the band between the self-titled album and 2001’s Take Off Your Pants and Jacket, which is great – it’s about time they got over nipples and fart jokes. Although it’s doubtful they’re over it per se… but at least they stopped singing about it.

Rounding out the selection of greatest hits are two new tracks, entitled “Not Now” and “Another Girl, Another Planet.” The band has thankfully chosen to keep the sound they adapted with the last album, which is reminiscent of the days of Boxcar Racer. Despite my love for old-school Blink, I like this style a lot more.

I don’t think figuring out if you’ll like this album is rocket science really. If you like Blink-182, you’ll love the album. Clearly. Because you’ve heard it all before. If you don’t like them, and you go and buy the album anyway… well, you’re a moron, but whatever. It’s your choice I guess. But you’re bound to be disappointed. Personally, I loved it, and if not for the fact that I’m totally weirded out by the fact that my 12-year-old brother loves it just as much as I do… I’d probably listen to it 24/7. Instead, I just listen to it whenever I’m feeling nostalgic about the good old days, when nipples and fart jokes ruled my teenaged world.  [ END ]