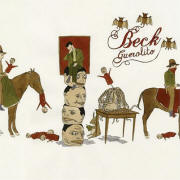 If nothing is broken, why fix it? This sentiment applies fully to Guerolito, a re-mashed and re-mixed version of one of Beck’s finest works to date, Guero. Guero in itself is an exceptional achievement, and I therefore just don’t understand why anyone felt the need to release this underwhelming, bastardized adaptation of it. Of course Beck is still Beck, and so Guerolito isn’t awful due to the fact that the fundamental songs are the same. Nonetheless, listening to Guerolito leaves the listener feeling slightly empty… honestly, I dare you to listen to it and not want to just listen to Guero instead.

It’s kind of funny that Guerolito turned out to be such a disappointment, because almost all of the contributors are phenomenal. Air, Adrock (of Beastie Boys fame), Boards of Canada, EL-P, Mario C. – awesome contributors galore, and yet no decent final product to show for it. Strange, is it not? The problem with a lot of the songs on Guerolito has to do with uninteresting, monotonous arrangements and/or the matter of the re-mix not matching the intent or feeling of the original. For example, Th’ Corn Gangg’s new take on “Emergency Exit” essentially ruins everything the song initially had going for it. Equally ruinous is Adrock’s spin on “Black Tambourine.” By making “Black Tambourine” clangy, noisy and terribly annoying with the overbearing “ugh!”’s and “what!”’s thrown in, the song becomes virtually un-listenable… a far cry from what it is on Guero.

This isn’t to say that absolutely everything on Guerolito is bad. French synth-pop geniuses Air do “Heaven Hammer” like you would expect them to… church-like organ sounds, echoing drum lines… they offer a generally fascinating and enjoyable approach to Beck’s work. Also, when Boards of Canada do “Broken Drum”, the result is spectacular. Their work on “Broken Drum” highlights and emphasized everything that is great about the song, from Beck’s lonesome vocal performance to the ambient and abandoned tone.

Guerolito, on the whole, is highly unsatisfying. Although it has its good moments thanks to a few contributors, for the most part it falls short of what was achieved with the original Guero and, in my opinion, should never have been released. I think it would have served Beck better to have released the better re-mixes of Guerolito as B-sides to his singles. If you’re a fan of Guero and Beck’s work on the whole, I would suggest not purchasing Guerolito… I virtually guarantee you will be as sorely disappointed as I was upon listening.  [ END ]