“Can you hear me? Hear me whispering?” Despite the fact that Foo Fighters lead singer Dave Grohl does not repeat these words anywhere on In Your Honor’s second disc, they provide an appropriate description of the ten acoustic tracks you will find on the album. For disc two, Grohl and company have traded in their big heavy electric guitars, gut wrenching screaming and hard pounding drums for acoustic guitars, mandolins and pianos to create some of the softest, most melodic material the Foo Fighters have ever produced. While disc two of In Your Honor does not quite match up to the quality of the hard rock disc, it certainly has its moments of triumph.

Disc two of In Your Honor begins with the very slow paced song called “Still.” The song is so acoustic and slow that it comes across almost as being a lullaby. Despite the fact that it introduces the acoustic theme of the second disc very well, listening to “Still” might make you too bored to actually listen to the rest of the ten tracks. After the lackluster “Still,” the record picks up with track two “What If I Do?,” another slow number, but this time with a good beat and nice vocals from Grohl. Song number three “Miracle” features more great Grohl vocals and some nice string arrangements that complement the acoustic guitar well. Definitely the best song on disc two comes at track four, the catchy “Another Round.” This track features some awesome melodies from Grohl and a catchy sing along chorus along with something we usually never seen in a Foo Fighters song, a harmonica. Next comes, “Friend of a Friend,” another decent song, but one that has some slightly strange lyrics that could have used some work. One thing that becomes more evident as disc two progresses is that Grohl is a very underrated vocalist which can be exemplified in his emotional vocals on the songs “Over and Out” and “On the Mend.”

The only real bad song on In Your Honor’s second disc is track eight, the bluegrass and jazz influenced “Virginia Moon.” Jazz singer Norah Jones guest stars on this song doing a duet with Grohl and it seems that her presence helped produce a misguided song that does not belong on the disc. The song sounds like a throwaway from one of Jones’ albums and it’s surprising that Grohl would include such a track on a Foo Fighters album. Quite surprisingly, one of the best songs on the second disc is “Cold Day in the Sun,” Foo drummer Taylor Hawkins’ debut on lead vocals for the band. Hawkins shows himself to have a very distinctive voice on the song and it provides a nice break from Grohl’s vocals. The disc closes out with the very emotional “Razor.” Grohl sings the lyrics with such great emotion that you can almost feel his pain as he sings the words.

Overall, disc two of In Your Honor is a solid collection of acoustic material, with only a couple of misses. The acoustic disc is definitely not as accessible as the rock disc and it takes a bit of time to really get into the ten songs, but after a few listens, the songs become catchier and more enjoyable. The acoustic disc also compliments the hard rock of the electric disc very well despite the fact that it’s not quite as good. Dave Grohl is truly a gifted and extraordinarily talented musician and he exemplifies this extremely well on both discs of In Your Honor.  [ END ] 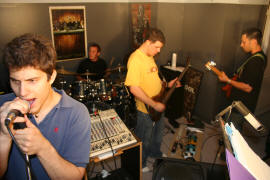 Fake Reality: “Dreaming of the Reality to Come” 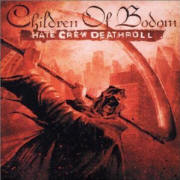