With his boundless ambition and the immense scope of his musical imagination, it seems that John Beckmann can creatively capture just about anything he’s striving towards. Forty-plus years into his career, Beckmann is writing arguably his best music ever, with his Mortal Prophets recording project on which he has been squarely focused over the last couple of years.

Now a few months after introducing you to the Mortal Prophets’ debut EP, Stomp The Devil, we bring you the premiere of “Lord I’m The True Vine,” the final song to be released from the first Mortal Prophets’ full-length Me and the Devil. The bluesy, gospel-inspired track is a remake of a song recorded nearly 100 years ago by Eddie Head and His Family, a short-lived, vocal gospel group that captured a few songs, including this one, around the year 1930.

To help infuse his version with some more modern gospel vocals, Beckmann reached out to Irish singer-songwriter and choral director Aoibheann Carey-Philpott, one of two songs she lends her soulful voice to on Me and the Devil.

Explaining how he discovered the song and then worked through it with Carey-Philpott, Beckmann says:

“I first discovered ‘Lord I’m The True Vine’ on the amazing John Fahey compilation released in 1997, American Primitive, Volume 1: Raw Pre-War Gospel (1926-36). Eddie Head and His Family only had a solitary recording session, on 22 April, 1930 in Atlanta, Georgia, at which they cut four sides, the names of the family members who play guitar and tambourine in support of Eddie’s vocals are unknown.

“We brought in Aoibheann Carey-Philpott to do the backing vocals, I kind of bob and weave in and around her, she has the anguished voice of a soul angel, and I wanted to step back a bit and let her take center stage on this track.”

Along with “Lord I’m The True Vine,” all of the tracks on Me and the Devil are Beckmann’s own unique take on some timeless covers. They were songs that touched him so much, both lyrically and spiritually, that he felt more than just a desire, but a need to record them and interpret them in the way he felt touched by these songs. They are more poetic and musically diverse than Stomp the Devil, reflecting the breadth of his musical tastes, like primitive blues, noisy punk, and German electronica.

You may think of the record as a crash course in a century’s worth of music meant to move you, albeit in very different ways. Beckmann will keep it moving this year with another experimental record on the horizon titled Dealey Plaza Blues that will yet again redefine his incomparable musical ability. 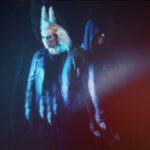