You could say that the blues runs through his veins. To those who knew Vince Vanguard as a youngster, it would come as no surprise that he has become a blues musician and released his debut full-length record Spirit Blues last month. His father was a blues enthusiast, deeply devoted to the genre, so much so that Vanguard’s birth name is Eric Plein, named after the legendary blues lover himself, Eric Clapton.

Now Vanguard is living his blues dream, with Spirit Blues receiving lots of adulation, and today, we help to bring you the debut of the official video for his single “Atlas.” The clip is as no-nonsense as Vanguard is as a musician, featuring him performing the song in a recording studio, along with the assistance of his faithful and talented bandmates.

Discussing “Atlas,” Vanguard tells us: “There were several versions of this song with different lyrics and sections before ultimately landing on what you hear on the album. I had initially envisioned more of a delta blues or slide guitar tone on the track, but the Pink Floyd-esque vibe that Marcus Rezak channeled ended up being a unique compliment for the heavier and distorted rhythm guitar layers that make the main riff. I got to geek out with Chris Wright (the engineer at Violet) over a bunch of classic vintage gear that we used to record Spirit Blues, including the Compex compressor used for drums on Led Zeppelin’s ‘When The Levee Breaks.’”

“The Neumann microphone you see in the video being used to record the acoustic rhythm layer was from Jimi Hendrix’s famous Electric Ladyland Studios.”

He continues: “The Neumann microphone you see in the video being used to record the acoustic rhythm layer was from Jimi Hendrix’s famous Electric Ladyland Studios, and was used throughout at least the ’80s and ’90s to record hit records for a ton of artists including, David Bowie.”

The song deals with the overwhelming nature of having an identity crisis, doing your best to live up to a public image and lifestyle you’ve concocted, knowing full well that you can’t keep it up. You know it’s not authentic, so you work to move past this false sense of self, but you do so with a healthy dose of uncertainty.

Spirit Blues is precisely what you would expect from Vanguard, a solid ten-track album with roots in blues, folk, southern rock, and Americana. It features his undeniable prowess as not just a songwriter but a storyteller, singing frankly about his struggles that anyone from any walk of life could relate to. The songs represent where he was as an individual when he composed them, which adds a lot of vulnerability to the equation.

There’s a sense of relief and victory that is strung through the record, with Vanguard feeling assured that he fought off his demons, sought the help he needed, and now feels all the better for it. That struggle has led to full-fledged healing, and he hopes that there may be a lesson or two or just a tiny grain of hope you can take away from this impressive collection of stories in song. 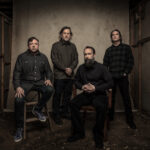