Who deserves balloons and medals?! You do! For being such a loyal devotee to the institution that is punk rock. For your efforts, we are presenting you with Mad Meg’s brand new album, Who Deserves Balloons and Medals?, ready now for your eager consumption, three days ahead of its formal release.

The New York City band has returned with their strongest effort, six original songs and a cover of a Dolly Parton track, which will be sure to catch you off guard. Utilizing dark, ironic lyrics and theatrical-like performances, the quintet touches on hard-hitting, current topics like rising social anxiety, the immigrant experience, and emerging cultural trends.

“Long time ago, we labelled ourselves as a ‘Punk Chanson Noir’ band. Our style evolved, but that description still rings partially true, mostly because it is so vague. In actuality, it might as well be any other three words. We don’t sound particularly punk rock except for a couple of songs, but there is a punk attitude that can run through the lyrics.”

The album features more maturity than Mad Meg’s previous releases, band it’s evident within the styles that the band combined together for these tracks. Some of the songs combine Americana with dub and Tuvan throat, something pretty special and unexpected for an act of this nature. As frontman Ilya Popenko explains about Who Deserves Balloons and Medals?, the album features more maturity but also more absurdity. There are dark elements to the songs, but it never is enough to preclude you from rocking out while having a grand old time.

It’s no wonder why the band can so effectively meld different genres and writing styles, considering the band members’ roots. The band features members from Russia, Eastern Europe, and of course, America. With such diversity, it’s no wonder why they succeed in being very musically eclectic, with influences that range from music theatre, jazz, cabaret, Russian folk music, classic rock, and more. They view punk rock more as an attitude than a musical genre, a state of being that acknowledges personal sovereignty and nonconformity. It’s a testament to the sincerity Mad Meg brings to the table, and it’s obvious when you hear it laced through their beautifully distinct approach. 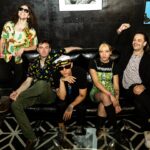