Our past shapes our future. It etches out who we are and who we are going to be. But it can also weigh us down with regret, shame, and guilt. The Beautiful Distortion offers an interesting point of view on the past’s relationship with the future with their brand new single “Lost.” The guitar-driven track is reminiscent of 2010s modern hard rock at its finest; heavy, thunderous riffs, soaring vocals, and pounding drums, in other words, a track ideal for rock radio.

This is the first single to be revealed from the band’s big upcoming release, Revision, due out on October 21st. This is a very ambitious record, set to be a double album with something for everyone. Half of the album will be originals that the band has been working on over the last several months, while the other part of the record will be dedicated to inventive cover versions of well-known songs. Details are still to come, but this will go above and beyond your average full-length.

With more insight on “Lost,” guitarist and vocalist Dave Doll shares with us:

“We all have a past, and every moment shapes our future past. This song isn’t about remembering the past; but being stuck in it. Physical and emotional scars that act as a constant reminder of mistakes we’ve made, how others have hurt us, and how we’ve hurt ourselves which close us off from embracing the present. Musically, that chaos is felt through stylistic shifts emerging from within through ethereal self reflection, quiet acceptance, and brutal realization of being too lost in emotion, lost in the past, lost in fear, leaving no way out. There’s no way to be saved. You’re lost.”

This same wide range of musicality and sound so well suited to the live setting has earned them significant gigs over the years, with maybe their biggest show ever to take place tomorrow: an opening slot for Disturbed at Musikfest in Bethlehem, Pennsylvania. That’s evidence of a band that people are taking notice of, an acknowledgement of the good work they have put in, and the positive buzz that is forming around them. 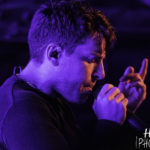