We’ve got a smooth jam for you today to help welcome the weekend. Producer and composer SCayos is sharing today his new collaborative single “Walkaway” with singer and songwriter Annie Elise, a nicely produced summer-sounding track about conflicting emotions manifesting themselves as the end of a relationship nears.

Rather than end with a big bang, things are slowly beginning to fizzle out, not for any specific reason, but just mostly as a result of two people growing apart. The character in the song hasn’t lost their partner yet, but they are already grieving the possibility and trying to look back to when the good times were rolling.

Regarding his new song, SCayos says:

“I’m really excited to share the first single of the record with Annie on ‘Walkaway.’ The song marks a new chapter in the journey of SCayos and I couldn’t be happier with how it turned out!”

As an artist, SCayos is quite evolved for a young man who hasn’t even reached his 20th birthday. “Walkaway” is the first single from an upcoming concept-based album that he is currently working on. The songs will make their way through the cycles of grief, namely, denial, anger, bargaining, depression, and acceptance, with each song meant to represent each of these categories. It was released as the first single because it lends context to what listeners will hear on the rest of this new record.

A collaboration between SCayos and Annie Elise had been brewing for some time, but it took until recently to make it happen. This team up has been percolating for about two years now, and it was done primarily remotely. The two wrote the lyrics together, which also happens to mark SCayos’ first songwriting credit. “Walkaway” is an important song in an artist’s career, for it represents a turning point in his career, showcasing his growth not just as a producer, but as a full-fledged artist. 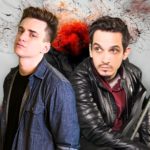