Harmonious, celestial, spiritual. A few adjectives that come to mind when characterizing Kramer’s brand new single “Like The Planets Love The Sun.” The artist is pleased to today debut that composition, along with a dazzling visual interpretation, created and prepared by multimedia artist Tinca Veerman. This is a visual representation like no other, impressionistic and technologically advanced, an exercise for the eye that incorporates depth-of-field perception techniques that force the eye to zero in on what’s central to the core of the sound-image events. It draws the listener and viewer into the light, making this so much more than just an audio-focused experience.

The debut of “Like The Planets Love The Sun” also coincides with the announcement of Kramer’s brand new solo album Music For Films Edited By Moths. The ten-track audio experience will be released on August 26th via Shimmy-Disc and Joyful Noise Records. The album will stay true to Kramer’s one-of-a-kind audio vocabulary that he has been moulding, refining, and finetuning now for decades. His composing is true and authentic, almost like a Leonard Cohen type of artist, just in a different genre and without the words.

Explaining his motivations and relationship with music, Kramer tells us:

“What I have come to embrace is the working notion that there is no Past, and no Future. There is only a constantly evolving series of microscopic moments that constitute the miraculous Present. As fertile as it is and always has been, for me, Memory is a chimera. So if you asked me what it is exactly that I am trying to do now, with Music, be it through song, or through ambience, I would confess that what I’m doing couldn’t be more simple; I am just trying to explain myself. I’m trying to show you who I am.”

“Like The Planets Love The Sun” is representative of most of what you will hear on Music For Films Edited By Moths. You may think of the songs as combining to act as a soundtrack for a film when there is no film accompaniment.

As a writer and a musician, Kramer’s thoughts extend far beyond what may be apparent from his extraordinary compositions. He thinks of words on a page, finished screenplays, characters and the paths that they embark on through a story, and storyboards that map out and lead to the finished product. The songs are mournful at times but also grand in nature and, in some ways, soothing and affirming. After listening to the record, you may think of Kramer as a sound poet, with words an unnecessary component to his ultimate vision. 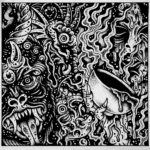 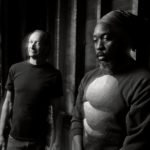