Every once in a while, a tour comes together that pairs artists whom you wouldn’t necessarily think of as an obvious match, but that makes so much sense once you see the alchemy of their pairing in action. This year’s dual-headline of genre darlings Thrice and Bayside is one of those tours. As bands who got their start planted firmly in the punk side of alternative, they certainly both brought that fierce energy you would expect from a punk show — but it’s the added artistry of the styles they later evolved into that really made for a special night.

After a fitting introduction of Belinda Carlisle’s classic “Heaven Is a Place on Earth,” Bayside triumphantly took the stage to blast out an old fan favorite in “The Walking Wounded,” a track whose alternating heavy-light-heavy-light dynamic set a perfect tone for what was to come. After playing a few older cuts, the band then kicked out some newer jams, including the chaotically catchy “Prayers” and “Interrobang” from 2019’s excellent Interrobang album, as well as the grooving and slightly-spooky newest single, “Strangest Faces.”

It was by this point in Bayside’s set that you could clearly tell the fans in attendance were having an absolute blast, as seen by the dozens of crowdsurfers and barricade-liners alike screaming out every word of high-energy bangers like “Sick, Sick, Sick” and “Duality” with a sweat-soaked, fiery passion. But, of course, all good things must come to an end, and what better way could Bayside possibly end such an incredible set than with their self-titled album’s most iconic pieces, “Blame It on Bad Luck” and “Devotion and Desire.”

So, to say that Bayside didn’t exactly make themselves an easy act to follow would be an understatement. Thrice, however, were more than up to the task. Opening up their set with a brilliant, career-spanning trio of the entrancingly sludgy “Firebreather,” the instant-classic, fan favorite “Black Honey,” and the epically beautiful “Promises,” Thrice made it abundantly apparent that they came to kill. And kill they did, especially once the Albany, NY crowd heard the first notes of the timeless “The Artist in the Ambulance” and dutifully belted out every word until they simply didn’t have the breath to continue.

After following that up with the melodic, pulse-pounding newer cut “Summer Set Fire to the Rain,” the band settled back into some old, punky classics in the amazing “Stare at the Sun” and “Between the End and Where We Lie” before going back to their newer, more rock-centric sound with the ever-moody “Still Life” and the sorrowful “Hurricane.” It’s honestly amazing to behold the way that Thrice can seamlessly switch between the highly variable styles on display across their catalog. You wouldn’t think they could pull it off, but they absolutely do. And after playing a hard-edged cover of The Beatles’ “Helter Skelter,” Thrice’s closer of “The Earth Will Shake” — a song that perfectly sums up their entire range of sound in four minutes — made sure that no one could possibly claim otherwise.

This tour wasn’t a pairing that seemed obvious when it was announced, but it worked so well. Thrice and Bayside are badass bands. This was true when they started two decades ago, and it’s every bit as true still today. If you get the chance to catch them on this tour, or any other tour for that matter, do it. 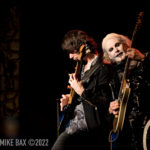 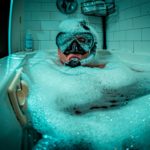