Some may argue that the most “powerful” rock bands are trios, and they may be quite right, especially when you factor in groups such as Les Shirley. This aggressive power trio formed in 2018, and since that time, singer and guitarist Raphaëlle Chouinard, bassist Sarah Dion, and drummer Lisandre Bourdages have been making their presence felt within the Montreal music scene.

Their sound is firmly rooted within the punk rock they grew up adoring through their teenage years, evidenced by the raw power chords, torching riffs, and intense vocal melodies that can’t help but resonate with you. They released their debut EP in March 2019, followed by their full-length debut Forever Is Now last March, a high-energy record that was made to translate well to live settings. It’s punk that feels raw and dirty and sounds perfect in a sweaty little club where you’re shoulder to shoulder with everyone and six feet from the stage.

What goes better with punk rock than tattoos? Not much! We recently spoke with guitarist Raphaëlle Chouinard for a session of Tattoo Talk, in which we discussed her first tattoo, her most painful one, and of course, her craziest one!

Raphaëlle Chouinard: “I got my first tattoo when I was about 17 years old from a high school friend in his parent’s basement. He had just bought a tattoo machine, and I was one of his first experiments… It was a quote from a Metric song reading, ‘not to feel a thing, keep the dream tight.’ Yes, I was an emo kid. As you can see, I got it covered up ever since by some really cool-looking Japanese waves.”

“I got many friendship tattoos somehow. One with my old band Syzzors (a pair of scissors), one with my buddy Dom (hands holding and head and a heart), a snake (for slytherin) with my roomie Cloe and one with three other friends of a… chip! This one is my favourite; it’s simply for our collective love of potato chips. Mine is a Doritos that reads ‘bold livin’ on the edge’ for the BBQ bold flavour.”

“Love my buddy Tristan @tristanmachine on Instagram. His style mixes a bit of graphic novel with minimalist art. I recommend his fonts, they are dope!” 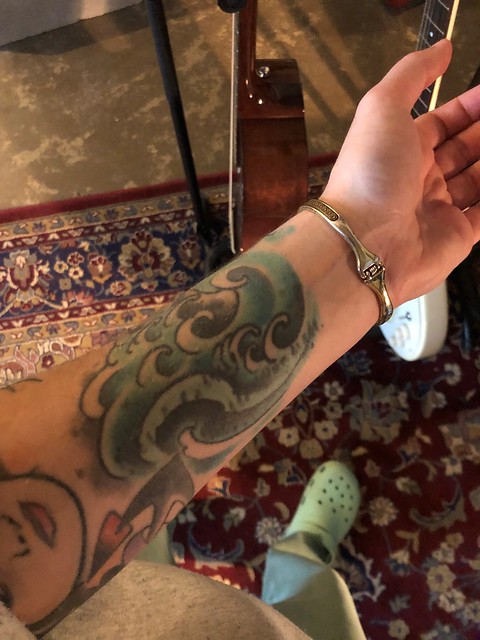 “Not at the moment, but I definitely want some more ink in the near future (they are expensive, man…).”

“Not yet, but we signed body parts before. Any sorts of body parts…”

We know you have one… tell us about that stoned/drunk joke-tattoo you once got….

“I don’t have any drunk tatts, but Sarah Dion (bassist) got one hell of a story. She went to a concert somewhere in a dirty basement in Montreal and got a tattoo with her best friend while they were pissed drunk. She ended up with a snake on her butt cheek. Yup.”

“As I said earlier, my first tattoo was made by a total newbie, so I had it covered up when the writing started fading and the ink spilling.”

“Oh yes, many. One, in particular, I can think of though. I was road tripping through California with my three besties when I was 20, and we stayed for a week or so in San Diego. I was really into the old school style back then and Cali is full of old school tattoo shops. I went in with a cool idea of a mermaid and a treasure map but the guy told me it would take about five hours to get it all done (lining and filling). I didn’t have much experience in tattooing back then so I said alright since we only had so many days there and I would not be able to come back for a second session or touch-ups.

“After three hours, I was in so much pain my friend had to make me watch YouTube on her iPod (it was 2012) to trick my brain into thinking about something else than the numbing pain. I never underwent another long session like that ever since… It kind of traumatized me but the result is dope and ten years later the colours are still popping.”

“Bruce Willis in The Fifth Element. Korben Dallas is so badass. I’d make it with a space background in graphic novel style. It’d be a cool nod to our song ‘Korben Dallas.’”

“I was a big fan of the French tattoo artist Sad Amish on Instagram, and when I heard he had a guest spot in Montreal I immediately emailed him to get a tattoo. Unfortunately, his spots had booked super fast, but he told me he’d keep me in mind if somebody cancelled last minute. I was so thrilled when he called to say he had a new availability the next day. I obviously really like graphic novels and old cartoon style so I asked him to draw me a (almost) naked woman smoking a joint and drinking hard liquor. It’s still one of my favourite pieces to this day.”

“When I first met my buddy Tristan, I had him tattoo ‘thanks for breaking my heart’ on my arm. We shared a lot of emo heartbreak stories that day and it definitely solidified our friendship.” 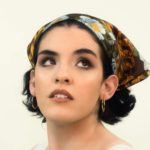 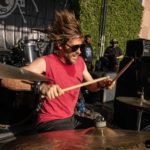