As both an individual and an artist, Majorlilkween is evolving. Both in life and with her career, she is in a place of comfort and growth, with inspiration hitting her in often different and unexpected ways. She recently released her latest single and music video for “ten 22,” a dream-pop, atmospheric pop song that successfully incorporates rock instrumentation to make a truly dynamic musical representation of where she currently is as an artist.

The song is a turn away from the trap-infused sounds of her previous recordings, marking the first time she has used real instruments and explored sounds outside of her so-called comfort zone. “ten 22” is a personal reflection of Majorlilkween’s on mental health. Written after she had experienced a severe panic attack, the song digs into her experiences with anxiety, depression, and particularly grief that stems from losing her father as a teenager.

Born in Tallinn, Estonia, Majorlilkween, whose real name is Alexandra Elizabeth Ljadov, has had a passion for music, performance, and the arts since she was very young. By 16, she moved to New York City to pursue a career in the fashion industry, and soon after, she also began developing her musical persona. She has been releasing music as Majorlilkween since 2019, a project inspired by her time in fashion, her love of visual storytelling, and her affinity for early 2000s pop and modern hip-hop.

Also a budding director, Majorlilkween oversaw the direction of the “ten 22” music video. Her motivation for the video was to explore the nature of nightmares, or bad dreams, and what is responsible for them occurring in our minds. Is it something greater taking control of us, or just our minds playing tricks on us?

With the theme of nightmares at play with her latest work, Majorlilkween has joined us today for a specially curated playlist of songs for you that she has referred to as the “Soundtrack to Your Worst Nightmare.”

“This is the symphony of your most wildest dreams. This song is truly a journey, a rollercoaster really; there is absolutely no time to breathe. Everyone on the track delivered, but I think we all know that Nicki Minaj spits the most iconic verse ever with this song, from the bars to the cadences of her voice – a beautiful nightmare, indeed.”

“This record has a haunting, yet magical sound. When I close my eyes listening to this track, I imagine a cute little girl with messy hair in a white lace, oversized nightgown. But when she opens her mouth, she has sharp fangs instead of teeth and she roars like a lion.”

“‘Wind It Up’ is the perfect pre-soundtrack for the scary part of the nightmare, it pumps you up and gets you ready. It’s giving, ‘let’s go bitch, you got this, no matter what’ vibes, and the music to me feels extremely colorful and whimsical. Personally, I’d like to feel and look like a bad bitch before facing the scariest part of the nightmare.”

“To me, this is the anthem of sad boy/girl hours. ‘Witchblades’ is definitely the soundtrack of your ‘personal struggle nightmare,’ where you are facing all the demons that you’ve been battling with. The music and lyrics are super dark and personal, and the listener can feel their pain, which is also why I and many others relate so much.”

“‘False Alarm’ is the chaotic dream that almost makes no sense. I feel like I’m running from the mafia who is trying to kill me and then the dream suddenly switches to an underwater battleship for no reason and I have to save myself. This song is definitely anxiety-filled and keeps me on the edge of my seat waiting for something to happen.”

“This song definitely gives me all the feels. It’s about a person that Grimes lost, therefore the name ‘Delete Forever,’ so I think a lot of people, including me can relate to it. This dream would definitely be about a loved one who is no longer with us. Honestly, those dreams can often be the scariest ones because when you wake up, the loss is still the reality. On the other hand, the music is so beautiful that it almost makes it ok, it gives me hope that I will be ok.”

“This record got all the theatrics like a nightmare would have. The aggressive beat, fierce lyrics, and impeccable delivery from both Nicki and Eminem. They came for blood and it shows. They ate it all the way down, no crumbs left. The title needs no explanation once you listen to the track. The dream would definitely have something to do with revenge and the rage that comes with it.”

“Sometimes a nightmare could also be a breakup. This is the best emo breakup song in my opinion, from the grunge queen and original sad girl herself, Avril Lavigne.”

“A toxic friend or a lover can also be your nightmare. In life, we come across people that are bad for us and make us do bad things, but they have this power to draw us in, and it’s hard to let that go. While listening to ‘Zombie Love,’ I feel like I’m reliving those toxic moments. The somber yet enchanting sound just brings that feeling out of me. Definitely a nightmare I don’t want to revisit.”

“Sonically this record sounds so eerie and numb. It gives ‘been pushed so far that there is nothing else left for me, so I really don’t care no more.’ When a person is in that mental space, it’s honestly the scariest thing ever, cause they might do something they really regret. I have definitely found myself in a similar states a few times, but luckily, I have been able to recognize it and pull myself out.” 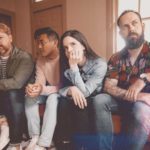 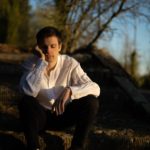