For decades, Athens, Georgia, has been recognized as a breeding ground for exciting new music—from the B-52s in the late ’70s to REM in the early ’80s to Pylon in the mid-’90s to current combos, including Drive-By Truckers and Widespread Panic. In 2022, an equally alluring artist has ascended out of Athens—country singer/songwriter, Kimberly Morgan York. When her debut record, Found Yourself a Lady, dropped just a few weeks ago, it thwacked me HARD—in the same way I was knocked out by the first Dwight Yoakam record, Guitars, Cadillacs, Etc., Etc., back in ’86. And I realized in short order, Kimberly was someone who I had to interview. So, I called her up. She took my call. And this is a “highlight reel” from that conversation. The entire interview can be heard by smashing these SoundCloud or YouTube links!

In a bonafide fanboy fashion, I drove the conversation straight to her just-released 10-song set.

“We recorded it back in 2006 with my old band, called the Everlovin’ Band, and that was my ex-husband, Brad Morgan, who’s in Drive-By Truckers, and then Adam and Wendy Musick and Chuck Bradburn who were in a band called, Southern Bitch at the time. It was really great. We called ourselves the Everlovin’ Band because Brad and I were married, and Adam and Wendy were married. But guess what? Nobody’s married anymore. So, we’re no longer ‘everlovin’.’ I have a whole new band.”

Authenticity and honesty are two components of Kimberly’s music that are being noticed. Are her transparent tunes autobiographies, or simply the result of well-crafted songwriting?

“Ninety percent of what I write is 100 percent from a moment of true inspiration from my life. I would say 10 percent of what I write is a composite of different experiences brought together and made into one moment. A lot of these songs are about being young and getting your heart broken. And those first heartbreaks are THE worst. But yeah, Found Yourself a Lady is definitely autobiographical in every way.”

The lead-off track on any artist’s debut record is super-important. And Kimberly hooked me from the git-go on her debut, with “Don’t Cry to Me.”

“It’s about an old lover, of course, that I spent a whole lot of time with and a whole lot of money on, and he was just a big ol’ liar. He always had something else cooking in the background. So, I put that song together for him. I don’t think he even knows that’s for him.”

To be creating music so honest and pure, Kimberly’s influences would have to be authentic as well. Was there a specific artist who she can point to as her definitive source of inspiration?

“I know everybody’s saying it these days, but I’m not lying, I’ve always been a HUGE fan of Dolly Parton. I guess we had the 8-Track in the car when I was a baby, and I learned all the words to ‘Touch Your Woman’ and ‘Me and Little Andy’ and ‘Coat of Many Colors’ and all of that. When I was tiny, I would sing ’em in public, I would sing ’em for the family. I would stand on the coffee table and sing while my uncles and dad played guitar for me.”

Despite her downhome country influences, Kimberly also possesses a secret passion for a certain iconic rock band — one she was introduced to in a rather frightening way, at a very young age.

“I do love KISS. But, when I was three years old, I fell asleep in the car on the way to my grandmother’s house. My parents laid me down to sleep in my uncle Kenny’s room, and I had never been in there before. But I woke up, and he had his walls painted slick red, shiny as they could be, and covered in KISS posters, all around me. So, I woke up in the middle of the bed, opened my eyes to this red room with KISS posters everywhere, and of course, I screamed and had a traumatic experience. I don’t know why they didn’t think about that, me waking up to seeing these painted faces in this red room. I thought I’d woken up in Hell, for sure. That vision is burned in the back of my eyeballs.”

With radio airplay ramping up rapidly, a proper video shoot happening soon, a sophomore set slated (already) for a summer release, and a slew of upcoming live dates on the books, Kimberly Morgan York truly is a busy, buzz-worthy bee—one who’s bound to blow up big in, 3-2-1… BOOM! 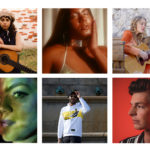 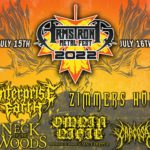