Are you ready for a lift? Not literally, but figuratively. Jason Lee McKinney and his band specialize in rock n’ roll of the uplifting variety, and if you don’t believe us, then they will show you with their latest single “When I’m Gone.” Along with the single release comes the official music video, a straightforward performance clip that does its job in emphasizing the passion and zest these musicians have for their art.

The Nashville-based group has become an institution in their hometown, and now they have arrived at album number eleven, titled One Last Thing. Through sixteen songs, the band expands their horizons like never before. Honest and spiritual, the album has gospel undertones to it, something that is not exactly common of McKinney and his musical cohorts, but certainly not out of line with their rock, R&B, blues, and country sound.

When asked about the single, McKinney had a lot to say. He comments as follows;

“Lyrically, ‘When I’m Gone’ is taking a jab about all the talk about legacy. Legacy is a farce. The Beatles will be a footnote in a music history direct brain download in 500 years so there is no way most of the rest of us will be remembered beyond a couple of generations even by our own family. I mean what do you really know about your great grandfather? But influence, now that is something of meaning. I won’t be remembered, but the way I love my kids, that might be. That lineage of love, health, redemption, and repentance when I fail that might be felt many years after I’m gone. Now the people won’t know it came from me but the positive effects of my love today can be.

“Legacy is about my name being remembered and that is meaningless, influence is about effecting people positively who won’t remember you at all. Aiming for influence has selflessness at its core while legacy is about the self. Because of the effects of time, influence is the only option anyway. I find that fact sobering and yet focusing and encouraging. Maybe the songs I sing will mean something when I’m gone but it won’t be attached to my name and that makes it even more beautiful.

“What sticks out to me the most about this song is my kids’ background vocals. Especially in the outro, my daughter Zakyra and daughter-in-law Juliana throw it down. The outro was done in one take. I remember saying, ‘that might be played better by some other band but that is the best this band can do! That is a take.’”

Set to be released this Friday via Bonfire Records, the album’s lyrics are heavily inspired by scripture and little cues that any big fan of the band would pick up, if you’ve been paying attention for ten albums now. What’s unique about the record is that McKinney felt free to really embrace that gospel background of his, which was always lurking in the background of the band’s sound, but is now front and center.

There was no clear and obvious intention to write a gospel album when they began writing. But with the collective unease and anxiety that has been persisting now for a few years, the tone of the music just kind of moved that way. Gospel music is representative of hope and togetherness, and the band just couldn’t help but be drawn to those sentiments as they got further into the writing and recording process.

McKinney wants to focus on the positives, and share in his optimism that we are much stronger together as a unit than we are apart. 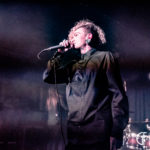