On December 7, She & Him transformed the historic Chicago Theatre into a winter wonderland. Setting the scene were Christmas Trees, LED snowflake backdrops, and small mountains of snow.

Zooey Deschanel (She) & M. Ward (Him) first released their Christmas album A Very She & Him Christmas 10 years ago; recently releasing a 10th Anniversary Edition and heading out on a short holiday tour which we were lucky to attend.

The night was reminiscent of a ’60s Variety Show filled with music, entertainment, and laughter as the show opened with comedian Pete Lee. After the crowd was warmed up from Midwest jokes and lots of laughter, the duo of the night took the stage.

Complete with a backup band and singers, Deschanel and Ward began with the classic Mel Tormé tune “The Christmas Song (Chestnuts Roasting on an Open Fire).” They continued to sleigh more Christmas covers as they followed with “I’ll Be Home for Christmas (If Only in My Dreams) and “Have Yourself a Merry Little Christmas.”

Each cover was a new take on a classic; with Deschanel playing her tambourine and Ward on his guitar. But the night was not only music, as between songs Deschanel would crack a joke and the two would banter.

Things took a tropical turn when Deschanel was joined by her two backup singers, Jessica Childress and Sara Mann, as they all donned leis and swayed to the beat of “Mele Kalikimaka.” Throughout the night the tropical ambiance continued as Deschanel played her ukulele intermittently. 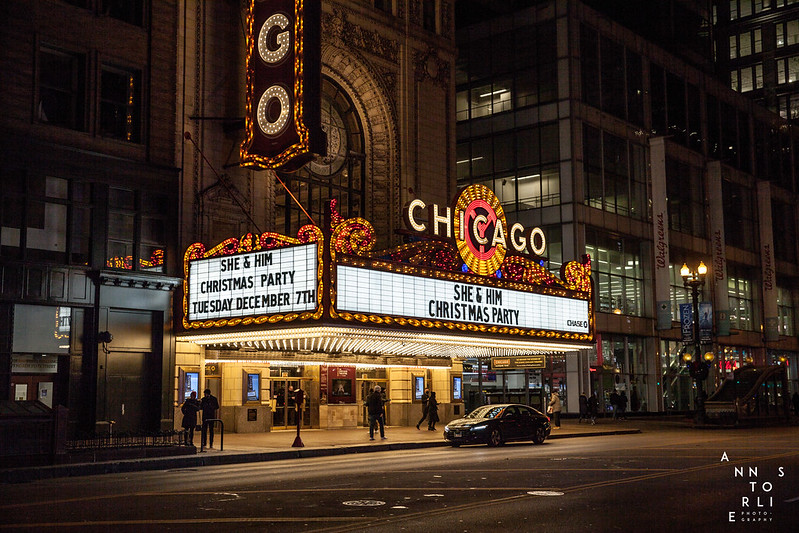 Another memorable part of the night was partway through the set, as Pete Lee joined Deschanel on stage for a Q&A interlude with questions from the audience. Even Jonathan Scott of Property Brothers fame made an appearance in a festive hat as he delivered the questions.

The night continued with more festive tunes including “(Everybody’s Waitin’ for) The Man With the Bag” and “Blue Christmas” before coming to the controversial tune “Baby It’s Cold Outside;” but this cover was different. Deschanel and Ward switched parts as Deschanel told the crowd “It’s okay for a girl to be creepy too.”

Following up with “Little Saint Nick” and “Sleigh Ride,” the duo took a turn away from Christmas as they played songs off their non-holiday She & Him albums. Songs included “Black Hole” and “In The Sun,” as their band members Keith Hollis (keys), Mauricio Morales (bass), and Danny Frankel (drums) each had their moment to shine.

The winter wonderland She & Him had created came to a close after an 8-song encore, choosing to end the night with “Carol of the Bells” and “Joy to the World.”