MisterWives returned to Chicago on December 3rd for an incredible sold-out show at Thalia Hall; bringing along artist Frances Forever on their first-ever tour.

Boston, MA artist Frances Forever (Frances Garrett) quickly rose to fame on TikTok with their indie bedroom pop. Frances Forever (who goes by they/them pronouns) has gained a lot of fans, and this was evident as they first took the stage with a backing band made of their closest friends Opening with “depression” and “fuck u” as they moved around the stage and switched from singing to playing the keyboard, Frances Forever immediately brought the energy. The energy was increased ten-fold as the backing keyboardist became a hype-man and jumped around on stage while they played “daytime,” “treehouse,” and the TikTok song that made them famous, “space girl.”

The anticipation for MisterWives to take the stage increased as the crew brought out a plethora of colourful flowers and mic stands wrapped in flowering vines, creating a superbloom of flowers on stage. Reminiscent of the meaning behind their latest album release SUPERBLOOM, the stage’s transformation was completed by a projector screen (built by bassist William Hehir) placed behind the band; that would project beautiful visuals created by artists Matty Vogel and Ann Slote throughout the show.

The album SUPERBLOOM speaks of sorrow, joy, and resilience as it tells the story of vocalist Mandy Lee’s split from drummer Etienne Bowler after 8 years together, and the journey Lee took as she created new beginnings.

MisterWives’ set took us on this musical journey as the band came on stage and started the show with SUPERBLOOM opener “the end.” Lee, dressed in a luminescent yellow outfit and coordinating glitter makeup was all smiles amidst the dark lyrics as she danced around the stage. The rest of the band, Etienne Bowler (drums), William Hehir (bass), Marc Campbell (guitar), and Mike Murphy (saxophone) were dressed in white and were all smiles as well.

MisterWives kept the energy going with “ghost,” “whywhywhy,” and “alone” while Lee continued to dance around the stage, never taking a break.

The mood took an immediate turn as the venue became eerily quiet except for Lee as she sat on the stage surrounded by flowers and sang the heartbreaking “valentine’s day,” the song most specific to her breakup. This was followed by “over the rainbow” as Lee stood in front of the projector while it played ominous images of thunder and lighting. 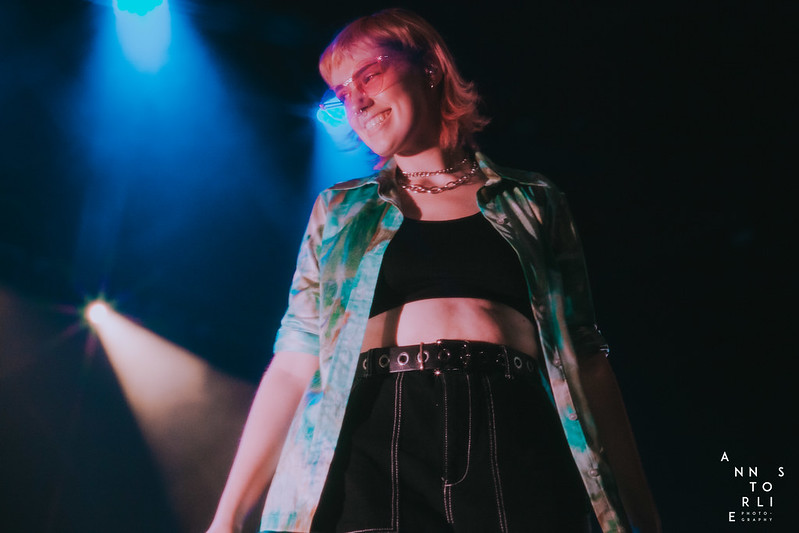 “it’s my turn” was played next as the energy was brought back up, and the projector began to portray brighter images; conveying the beginning of Lee’s transformation of putting herself first after debilitating lows.

The most memorable part of the night came after “love me true” as Lee told the crowd she had a proposal for them. To everyone’s surprise, the band picked up white signs covered in glitter one by one, spelling out a marriage proposal. The two lovebirds were in front of the stage, and it was evident from the ear-to-ear grins of the band that the proposal was accepted.

MisterWives concluded their main set with “muse” from SUPERBLOOM and “Reflections” from their debut 2015 album Our Own House.

The stage went dark before MisterWives took it once again for their encore, with Lee emerging on stage in a luminescent dress covered in flowers, portraying her completed transformation as she superbloomed while they played the song of the same name. “Our Own House” was their final song of the night, complete with a saxophone solo by Mike Murphy, and a group bow to close out the show.

Catch MisterWives on the rest of their Resilient Little Tour dates: