Nova Twins are an explosion of powerful, energetic intensity and they absolutely decimated the stage at the Leeds Academy. Their music is as much grime as it is punk in that the mentality is fully DIY and done on their own terms. It demands the attention of the audience, who respond with a massive amount of energy and even an equally monstrous circle pit.

Coming off the back of some big support runs with Prophets of Rage and most recently Bring Me the Horizon, this Enter Shikari tour is yet another opportunity for them to melt some new faces. They are a band that is re-writing the rules of rock music and deservedly picking up a legion of fans along the way. Join them, you won’t be disappointed.

Local lads Dinosaur Pile-Up are a great band but, seemed a little underwhelming. Whether it’s because they were sandwiched in-between the raw, intense energy of Nova Twins and the massive arena show energy of Enter Shikari, or the fact that they were crammed together in a small space at the front of the stage, I’m not sure, but neither of those things did them any favours.

Enter Shikari attract a pleasingly varied audience who are all more than up for tonight’s show. The reaction from the show highlighted what’s been missed so much by so many over the last two years and watching everyone in the room from the stage, the stalls and the balcony collectively losing their shit together was a magical sight. 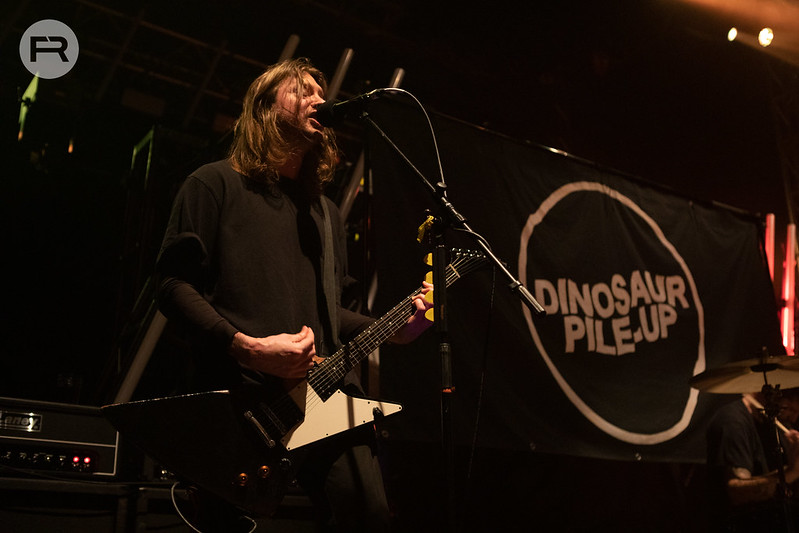 The sporadic use of confetti canons throughout the night added to the celebratory feeling of the show, and the singalongs during “Anaesthetist” and “Satellites” were goose-bump inducing, add to that a light show that’s a vision of beauty and mentalness and Enter Shikari have given every single person in the room plenty of value for their money.

There’s complete chaos in the venue, sometimes controlled, sometimes far from it but the overall feeling in the room is pure joy, so many different people sharing in the same emotion, and it was phenomenal. Enter Shikari – exit happy (and pretty sweaty).