Deeply personal, intensely revealing, and profoundly forthcoming, Wilderness Hymnal and Duncan Evans are operating at a whole other level on their new single “Three Tempers.” There’s a haunting, eerie quality to the song, a rumination from Wilderness Hymnal’s Javier Wallis on his childhood and the challenges that laid in his path forward. It comes from the forthcoming new album Until Liars Fear You, a split record from both Duncan Evans and Wilderness Hymnal, due for release on November 5th, via Trepanation Recordings.

The upcoming release is a reflection of overcoming violence and finding a way to escape both griefs from the past and fear of the future. In overcoming these challenges, the goal is to cherish the silver lining of hope and redemption to be a better you. In other words, wait “until liars fear you,” and wait for “love to hear you.”

Commenting on the song, Wallis offered, “‘Three Tempers’ is a very personal reflection on my childhood. Emotional wounds repressed and accumulated. Broken children trying to make it as adults in a world that reflects their fears back at them. Casting about for any god in the dark, not knowing who to trust or who means what they say.”

Evans added, “‘Three Tempers’ began as a couple of rough guitar ideas that were without a home until Javier suggested we use them. I like the way the dark, tense and hypnotic passages build and then give way to the relief of the more tender coda that still never quite resolves. I’m grateful that Javier contributed such emotionally deep lyrics and strong melodies.”

Currently residing in Utrecht, The Netherlands, Wallis was born in Gibraltar, a tiny British Overseas Territory. Defined by diversity, Wilderness Hymnal combines elements of European folk music, drone, post-metal, chamber music and electronic. It all comes together in an alluring psychedelic package that is both atmospheric and heavy, typically not styles that are used in tandem.

Evans’ tastes lie within dark folk and post-punk music, melancholy in nature, and reminiscent of Nick Cave & The Bad Seeds, Wovenhand, and Leonard Cohen. Interestingly, his roots lie in heavy metal, as a former member of black metallers A Forest of Stars. As a solo artist, Evans has released two albums, and zigzagged his way through Europe and the UK, becoming a staple of the indie scene. With their talents now combined, Wallis and Evans will take you on a musical adventure that we promise, you have never ever been on. 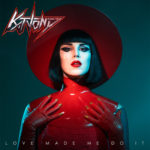