Hailed as South Africa’s premier death metal export, Vulvodynia is back with their crushing new album Praenuntius Infiniti, an album that rounds out the tale established in their critically acclaimed 2015 EP Finis Omnium Ignorantiam. The concept of Praenuntius Infiniti, as explained by the band, “tells the story of an interdimensional godlike being and his quest for ultimate power.”

With a dramatic intro building up, the story continues as the group slams straight into “The Shadowy Descent Of Gaia.” A crushing onslaught of blast beats and technical death metal, it becomes apparent very quickly that, to fully appreciate the depth and layered sound, you’re going to have to dig really deep into this album. A punishing, jarring beast of a record, the story continues through the devastating “Eternal Wasteland of Galaxies,” while the utterly room-flattening “Praenuntius Ascends,” featuring guest vocals from Matti Way (ex. Abominable Putridity, ex. Pathology) and Jon Huber (Bludgeoned), is really where you start to see the South African heavyweights flexing their musical muscles with the marriage of technicality to just outright slamming death metal forming a partnership that is simply unstoppable.

Vulvodynia continues the story with the epic two-parter, “Banquet Of Enigmatic Horrors,” where the guys take their musicianship to ridiculous levels and one that will leave anyone appreciative of the technical side of the genre absolutely gobsmacked. This tale continues through “Whispers of Calamity,” an instrumental track that borders on the ludicrous given how much the band has crammed into those two mind-frazzling minutes. It’s business as usual following that as the group slam straight into the bone-crushing “The Seven Judges” and the savage “Ravenous Revolution,” where again the layers wrapped around the face-melting death metal will fry your mind.

Effortlessly spinning off from the death metal blueprint, it feels like Praenuntius Infiniti has a surprise around every corner. While connected through the story, musically, the band has packed so much into this hour that you could hit play right after the last notes have faded and still find yourself slackjawed at the intricacies and layers Vulvodynia has woven into this extreme metal tapestry. From Sci-Fi effects to almost jazz-like technical sections to the queue of guest vocals offering their services (Jamie Graham, Oliver Rae Aleron, Jawd James and Elliot Einstein round out the list), in Praenuntius Infiniti, Vulvodynia has created the kind of story that it is impossible to put down. 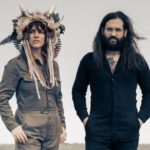 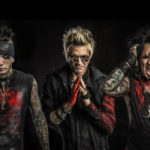