September 10th saw the release of the band’s debut LP, The Extinction Of You through Three One G Records. A pissed-off rager of an album, we sat down with Jason and Blake from the band and got them to talk us through the inspiration behind the songs.

Jason Hamacher: “We experimented with a few different rhythms for this song. I really wanted to write a rager in the spirit of Skitsystem, so I changed to a D-Beat and it all fell into place.”

Blake Harrison: “This song is about shitty people and having a goal to eradicate them from the planet. In the current political climate, it’s hard to ignore these people.”

Hamacher: “This is our ode to the pummeling noise of Amphetamine Reptile Records.”

Harrison: “A personal attack at what I like to call the hypocritical Christians – if you’re not going to live it, don’t preach it.”

Hamacher: “We wanted to write a song that used the “Battery” drumbeat but had the ferociousness of early Boston HC with a dash of Nirvana.”

Harrison: “Finally an easy one… about normal humans struggle with everyday life.”

Hamacher: “This was the first mid-paced song we wrote. In the early days of Zealot’s formation, there was talk of Tim Singer possibly on vocals, so Mike and I wrote this with Tim in mind. Once Blake and Peter joined the chaos, the song was retooled and honed into its current state.”

Harrison: “The coldness of the human psyche can be a lot to take at times, especially if the person interacting with it doesn’t understand. Can be summed up from the line “your body’s a graveyard” from the song.”

Hamacher: “Let’s try and write a fast song with weird drums! We got close.”

Harrison: “Sometimes a song title pops into my head and I write around the idea of the words, this is one of those times. Beware of toxic people.”

Hamacher: “This is our version of the Dead Kennedys meets early Slayer.”

Harrison: “There has been times in my life where I wrote some party checks that my body could not cash… needing to know your limits is a good thing.”

Hamacher: “We wanted to write a heavy dirge that contrasted our faster songs. I really wanted to incorporate some of Blake’s signature Pig Destroyer noise mayhem and so we came up with Covered In Flies!”

Harrison: “Greed and how it relates is the general theme on this one. Inspired by the song “Halo Of Flies” by Alice Cooper, kinda my version of that without the 007 stuff.” 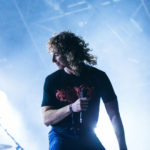 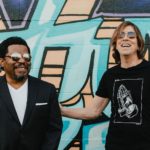