It’s been a long time coming, but Lizzie & The Makers have come through in a major way with their new album Dear Onda Wahl. The long-awaited follow-up to 2015’s Fire From The Heart of Man and the 2018 EP Meanwhile…, the new release is an expansion on the psychedelic, roots rock, and shoegaze-influenced sound they already introduced to fans.

Recorded at Mission Sound Recording in Williamsburg, Brooklyn, Dear Onda Wahl was heavily inspired by both more traditional rock music, as well as David Lynch films and Twin Peaks. It was co-produced by Reeves Gabrels, The Cure’s lead guitarist since 2012, and a man who has worked with the likes of David Bowie and Tin Machine, as well as Grammy-winner Mario J. McNulty, who has also worked with Bowie, as well as the legendary Prince.

A true proponent of self-expression and staying true to who you are, we recently chatted with Lizzie & The Makers’ frontwoman Lizzie Edwards for our latest edition of Tattoo Talk in which she told us all about her body of art.

Lizzie Edwards: “My first tattoo is a tribal sun (I know) on my lower back. I got it when I was 18 near my college in New Hampshire. All of my friends were getting piercings and I wasn’t really into that, so I got inked!”

“Amy Shapiro has done most of my work and is incredible. She used to work at Three Kings, then Lifetime Tattoo in Denver. She’s the best. Also, MJ at Baneul Tattoo in Manhattan is unparalleled and did a mermaid for me inspired by one of our new singles.” 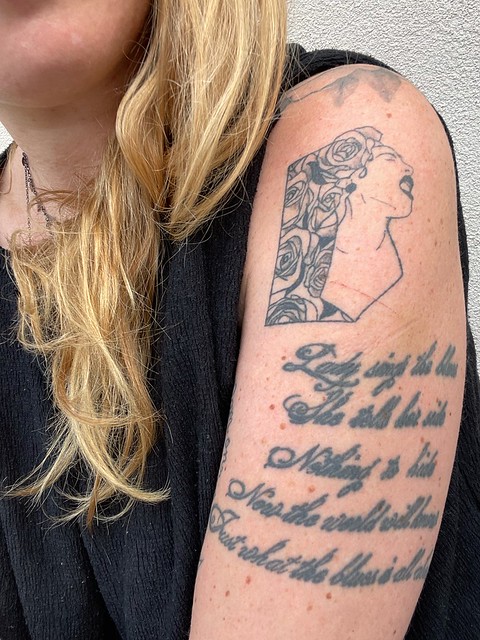 Yes! I’m in the process of getting a ram’s skull with flowers on my left calf. I’m an Aries and have been wanting this one for a long time.

(laughs) Not yet, but there’s still time!

I actually don’t! I can’t believe I’m saying this, but I really have put a lot of thought into every piece on my body. It’s there forever, you know.

I do have some that I got a while back that just haven’t aged well or are connected to people I’m no longer in contact with. I’d like to get them covered up, but I’m in no rush.

Not yet! I’ll keep you posted…

Yes, the Madame Butterfly tattoo on my inner upper arm was pretty painful. When Amy was doing the shading I definitely saw stars! It was the first time I wasn’t able to sit through a whole session.

I would say it’s more planned. Whenever I have an idea for a tat I always tell myself to wait three months. If I still like the idea after that amount of time, then I’ll make an appointment. I have found that is a foolproof way to avoid getting tattoos I’ll regret!

I mean, getting a tattoo in New Hampshire was pretty strange. There was a shop parrot and just this eerie chainsaw massacre vibe to the place that was in a house in the woods. It really made you feel like you were walking into the clutches of hell and never coming back (laughs).

Amy and I are friends as well as having an artist/client relationship, so almost every session was like therapy! We talked a lot about our dating lives, mostly our disappointments. There is nothing I wouldn’t share with that woman, including some embarrassing and frustrating sexual encounters (laughs).