It would only take a glance at his musical resume to realize that Chris Grey is a prolific young man, talented and capable well beyond his years. The 19-year-old has earned a lot of industry success, both as a producer for others and as a recording artist. As a producer, he has worked with an impressive list of musicians, including Brazilian stars Öwnboss and Zerky and Canadian hip-hop duo 88GLAM. As a performer, Grey recently released his latest single, “I Should Be Happy,” which has helped solidify his status as one of Canada’s most notable emerging R&B and pop artists.

His musical style is very much motivated by his family roots, with his father from Kingston, Jamaica, and his mother from Kingston, Ontario. Grey’s father was a well-known DJ in Jamaica, and exposed his son to a lot of reggae, R&B, and disco growing up. Conversely, Grey’s mother helped him discover the more mainstream Canadian pop and rock she grew up with. Intense, emotional, and lasting, Grey has a bright future ahead of him.

With such a diverse musical palette, Grey made for the perfect target for our latest Stereo Six feature in which he shared with us some songs that have left a lasting impact on him as a musician.

“Prior to hearing this song I pretty much only listened to EDM music. I remember hearing it on the radio while in the car and loving it immediately. I shazam’d it and listened to it three times in a row. After that, I dove into his whole catalogue and fell in love with some of his older albums. This song single-handedly changed my taste in music. It wasn’t long before I was listening to mostly R&B and rap.”

“Discovering this song was a happy accident. I was researching an idea I had for an album title and was checking to see if there was already a big album with the same name. When I searched it I found ‘Nostalgia’ by Chase Atlantic at the top of the list. I decided to listen to a few tracks and when I heard ‘Church,’ I was confused as to why I was drawn to it. I didn’t know if I liked it at first, but I kept listening again and again and it grew to be one of my favourite songs. The sound is pretty intense and has a strong rock influence so it was very different from anything else I was listening to at the time.”

“I love the production and melodies in this song, as well as the fact that it has a darkness to it while still being a catchy pop track with some really unique sounds. This track has definitely influenced some of my sound design.”

“This song inspires me to write more self-reflective and story-driven lyrics. I like ballads that are a little more epic and impactful and have a strong build from beginning to end. It unquestionably was a motivator for my most recent single ‘I Should Be Happy.’”

“I love the cool retro vibe of this song. All of Bruno’s songs have a real groove to them where you can’t help moving. This song has inspired some of my melodies, spacey vocal elements, and drum grooves.”

“I became obsessed with this song when I was around 7-years-old. I especially loved Randy Rhoads’ incredible guitar sounds. It blew my mind that the guitars acted as an answer to the call of the vocals. Ozzy had an impressive range and tone, but also confident vulnerability, which certainly ingrained in me the importance of giving it all I’ve got when singing.” 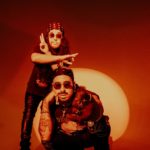 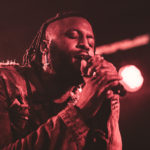