It’s been an up and down last couple of years for Snotty Nose Rez Kids. In 2019, the duo was riding high, playing over 100 shows off the success of their Trapline album, which also received award nominations from the Juno Awards, the Indie Awards, and the prestigious Polaris Music Prize. Tack on a 23-city U.S. headlining tour, and the guys were over the moon. Then, of course, the pandemic hit, which interfered with the release of their Born Deadly EP, and prevented them from expanding their fanbase out on the road.

The last year and a half have certainly been a struggle for Yung Trybez and Young D, both hailing from the Indigenous community of Kitimat, British Columbia. But while stuck in isolation, they continued to write and record, recently releasing “Something Else,” which will be followed by the release of their new album Life After next month. The album is very much inspired by the pair’s experiences over the last couple of years, and how it has affected them as people.

We recently had the good fortune of catching up with Yung Trybez and Young D for a conversation about new music, the Indigenous hip hop scene, writing new music, and getting their songs featured on various television shows.

Your new single “Something Else” is a banger, to say the least. There’s an interesting story behind this song. Tell us more about what inspired it.

Yung Trybez & Young D: “That song was inspired by the last presidential election last fall. At one point, CNN showed the poll numbers and the percentages of different races that voted. Instead of having ‘Indigenous’ as one of the groups, they had it labelled as ‘Something Else.’ Naturally, indigenous TikTok and Twitter flipped it around and roasted CNN with jokes about it. It just goes to show how we can flip something negative into some humour! It only felt right to write something inspired by that.”

How did you first identify with hip-hop when you were younger? What made you want to do this professionally?

“We played a lot of basketball growing up. And more often than not, we were always the youngest ones on the team. There’s a big All Native Basketball Tournament each year that we play in. All of our older cousins lived and breathed hip-hop, especially the classic ’90s tunes. Tupac, Biggie, Dre, Snoop, Wu-Tang. There’s also many similarities between hip-hop culture and Indigenous culture. From MCing/storytelling to dancing and art. They really go hand in hand. So we naturally gravitated towards hip hop.”

How did you guys initially meet? Being from the same community, have you known each other from a young age?

“We’ve known each other for as long as we can remember. We’re cousins. Both of our families had an open-door policy with each other. Both of our parents would make sure that we were all taken care of and safe no matter where we were at. We also had a natural built chemistry from playing ball together for so many years.”

Mainstream hip-hop is obviously dominated by African American culture, but little do some people know, there’s a very strong Indigenous scene as well. Who are some Indigenous rappers who have really inspired and motivated you?

“You always have to pay homage to all those that came before you. For us, there were groups like Warparty and Rez Official. The Halluci Nation (formally known as A Tribe Called Red). Joey Stylez. Drezus. HellnBack. Back when we were coming up it was difficult to find these artists because social media wasn’t as we know it to be now. But groups like that definitely paved the way for artists like us. We hope to do the same for the next generation coming up.”

You’re both a part of the Haisla people who primarily occupy Kitamaat Village in British Columbia. What was the reaction from your family and community when you started to take music more seriously? Was everyone supportive?

“Our community is everything! They were the backbone that allowed us to get our careers off the ground. Especially our families. But we wouldn’t be where we are today without our nation’s unconditional love, patience and support. Haisla Nation.”

Although you come from a fairly small community, would you say that there’s any type of hip-hop or music scene? Are there other rappers/artists we should know about?

“There’s not really a music scene up there. But we’re more than sure that there’s kids out there that have dreams of pursuing music!”

For a duo that’s only been together for five years, you’ve already released a lot of music and accomplished quite a bit. Would you say you’re someone who’s always writing new stuff? Or do you specifically set aside certain times to write?

“We do our best to grind out new demos weekly to keep the juices running and the ideas flowing. But from time to time we will take little breaks to focus on our health once we begin to feel the energy running low. We’re still learning how to have the right balance.”

You’ve been successful at getting your music into some television shows and films like Trickster, Monkey Beach, and Resident Alien which is no easy feat. How have you managed to get your songs into these productions?

“We have an amazing team and manager! We focus on making great music and they understand the vision.”

Born Deadly was released about a year ago. How do you feel about the EP now looking back a year?

“It was a dope milestone in our career. But it was also the first time we didn’t really get to celebrate a release date together. It came out just after COVID-19 restrictions hit. That was also the project we started to experiment with our sound, which helped us grow into the new music that we’re doing today. We’re still proud of that body of work.”

The release of Born Deadly was to coincide with your first U.S. tour which you obviously had to cancel because of the pandemic. How painful was this to have to cancel, and are you trying to reschedule that tour anytime soon?

“PAINFUL! We were set to tour all over the U.S. and then some. So that took a toll on us mentally, for sure. Not to mention how it affected us creatively. Before the pandemic, our inspiration came from our travels and being able to experience new places. So it forced us to dig deep for our writing this past year and change. But with all that being said, eleven of those 23 dates have been rescheduled and tickets are on sale now. We’re hitting those cities from October 25th to November 11th. And we’ll be announcing more dates soon.”

Are you currently writing any new music? Do you have a new album or EP on the way soon?

“New album is done! It’s called Life After and it’s going to be released on October 22nd. We can’t wait for y’all to hear this one.” 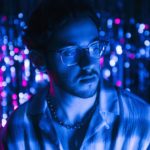