Here in the UK, restrictions and plans are changing on a seemingly daily basis, so we thought it would be useful to round up all the latest tour news and festival updates in one handy place. Keep checking back as we’ll be updating this on a regular basis until shows start returning in the, hopefully, not too distant future.

Latest Update: Promising festival attendees a cross-culture blend of an alternative world taking over the planet, the one-day event will see hip-hop and alternative culture collide to create a mouthwatering line-up that includes Architects, Machine Gun Kelly, Sleep Token, Bexey, The Kid Laroi and many more. Exclaiming that ALT+LDN will offer you a Bank Holiday Monday like you’ve never seen before, we reckon this could be the place to be seen this Bank Holiday weekend.

Latest Update: Taking place across multiple venues in Liverpool, Sound City makes its return in 2021 with another stellar line-up. Featuring some of the hottest new acts on the scene, fans will be packing into music venues across the city to check out the likes of The Snuts, Baby Queen, Pretty Sick, Red Rum Club, Noisy and many more. With over 150 acts scheduled to play, time to plan an October trip to Merseyside where you might just find your next favourite band.

What: Blackberry Smoke
Where: European Tour
When: February – March 2022

Latest Update: Having released their brilliant You Hear Georgia album recently, Atlanta rockers Blackberry Smoke have announced a string of UK shows, as part of a full European tour in early 2022. The Atlanta, GA based band are set to bring their southern rockin’ sounds to these shores next February. Special guests on the tour are Nashville 4-piece, The Steel Woods. The tour kicks off in Barcelona on February 2nd and reaches the UK for a run of shows on February 27th.

Latest Update: Too late if you’ve not already picked up a ticket for this one as Parklife 2021 has already sold-out. Prior to COVID, over 150,000 fans packed into the Manchester site for this regular on the UK festival calendar. Returning this year, Parklife attendees are going to be treated to a line-up that features the likes of Little Simz, AJ Tracey, Mabel, Camelphat, Skepta, Slowthai and many more.

Latest Update: After an epic and well documented 45-year career that launched an era of rock n roll legends, KISS launched their final ever tour in 2019. After COVID-related delays, the band have announced they are bringing the latest leg of the tour back to Europe for a headline run in June and July 2022. The run of dates kick off in Dortmund, Germany on June 1st and includes a UK top at Download Festival where the band will be headlining the festival on June 10th.

Latest Update: Taking place in the leafy surroundings of Lowther Park in the Lake District, Kendal CallingKendal> is a favourite on the UK circuit for festival goers who like more chilled surroundings. That being said, the line-up for this year’s return is far from chilled as Lowther Park is set to rock to the sounds of a line-up that includes Stereophonics, Dizzee Rascal, DMAs, Blossoms, Frank Turner, The Snuts and many more.

Latest Update: Possibly the only dog-friendly festival we’ve ever heard of, Standon Calling returns in July to celebrate it’s fifteenth birthday. Featuring a suitably celebratory line-up, music fans will be treated to appearances from bands like Bastille, Primal Scream,

, Pale Waves and Jake Bugg. However, if you fancy something other than music, Standon Calling has everything from comedy tents to family entertainment to adventure playgrounds.

What: ArcTanGent Festival
Where: Fernhill Farm, Somerset
When: August 17-20, 2022

Latest Update: Set for August 19-21, at Fernhill Park in Somerset, organisers issued a statement announcing that their 2021 weekend, set to feature the likes of Opeth, Cult of Luna, Tesseract, Oathbreaker, and Rolo Tomassi, was being pushed back to August 17-20, 2022. In a stinging attack felt by the entire festival industry, organisers said “Although they’ve provided a similar scheme for film & TV, the Government have completely let the live music industry down by refusing to back a simple insurance policy.”

Bands already confirmed for the 2022 festival include Opeth, The Locust, Cult Of Luna, A.A. Williams, Svalbard, MONO and more with all tickets purchased for the 2021 festival remaining valid for 2022.

Latest Update: Ska-punk legends Less Than Jake will be returning to the UK for an extensive UK tour in March and April 2022. Joining the band on tour will be Skinny Lister, The Toasters, and Millie Manders and The Shut Up. The tour kicks off on March 29, 2022 at the Dublin Voodoo Lounge before winding up on April 9, 2022 at London Kentish Town Forum.

Latest Update: In support of his new album Intruder, electronic-rock legend Gary Numan has announced a full UK and European tour for April and May 2022. The tour is set to kick off in Cardiff on April 28th. Of the tour, Gary Numan said: “To say I’ve missed touring would be a colossal understatement. It’s the life I chose when I was a teenager so not being able to tour the world has been very difficult. But now things are changing once again and the next UK tour has been announced and I am as excited as I was when all this started for me a lifetime ago. More so in fact. I can’t wait to walk out onto a stage again, to hear the roar of the crowd, the ear-shattering volume of the music, to be bathed in light and soak up that emotion. It’s what I’m here for.”

News of the tour follows the recent announcement of the global streaming live event Intruder: The Worldwide Concert Premiere, which will be hosted by the leading on-demand live performance platform Stabal on June 17th. The show will see Gary Numan and his band perform several songs from Intruder for the first time as well as a selection of songs from his impressive career. Get tickets from here.

Latest Update: Following the news that Norwegian symphonic black metal heavyweights Dimmu Borgir had pulled out of their Special Guest slot at this year’s event, the Bloodstock team confirmed that the UK’s very own Cradle of Filth would be taking their place. Also added to the line-up for this year’s event, set to take place in August, included Onslaught, Beholder, Ward XVI, Raised By Owls, and Anakim. 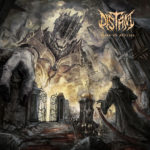