Part Dutch, part Slovakian, slamming deathcore brutes Distant are back with Aeons Of Oblivion, the final part of a trilogy of releases that started with 2020’s Dawn Of Corruption before continuing with Dusk Of Anguish, a six-track effort released earlier this year.

This offering, consisting of five new tracks plus the rest of the story, wraps up the tale of Tyrannotophia in one brutal, punishing package. The sound of the world’s damnation, Aeons of Oblivion is a truly stamina-sapping display performed by the six-piece deathcore outfit. Clocking in at just over an hour in length, this is an album for the true deathcore diehards. As the suitably epic intro track “Pandemonium” lurches into the opening salvo of “Hellmouth,” a horrifying mix of guttural vocals, and slow, juddering guitars, the scene is very much set for the rest of this punishing effort.

Primarily built around slow, sludgy deathcore, Aeons of Obliveon takes you on a journey into the hellish world they have created. Should you decide early on that you will join the deathcore mob on this journey of revenge and damnation you will be joined along the way by a slew of extreme metal guests including Adam Warren of deathcore brutes Oceano on the title track and Jason Evans of UK filthmongers Ingested on the suitably disgusting “Dawn of Corruption.”

Elsewhere on this dark, nightmarish trip, the soundtrack is peppered with foul guest vocals from Mendel bij de Leij formerly of Aborted, Lochie Keogh of Alpha Wolf and Kyle Anderson of Brand of Sacrifice, the latter providing guest vocals on “The Tyrant’s Covenant,” one of the five new tracks that make up this brutal tale. Aside from the dramatic interludes used sparingly to break up the onslaught, Aeons Of Obliveon is, for the most part, an uncompromising, barbaric listen. Relentless from the outset, if you’re willing to join Distant on this merciless journey, make sure you come well prepared for this is one hour that will push you to the very limit. 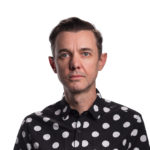