There’s just no stopping the musical freight train that is Franz Kirmann. The French composer has returned with another of his cutting-edge sonic adventures, this time a new collaborative EP titled In Waves, that was written and recorded in tandem with Italian artist Roberto Grosso.

Due out on April 9th via Kirmann’s own Days of Being Wild record label, the record straddles the darker and more eerie side of electronic music, which is fairly common when it comes to Kirmann’s musical output. He has described the EP as being “filmic,” a group of songs that were produced and composed with a cinematic approach to them. Their goal was to make a more intense, explorative piece of music that goes beyond just what you hear. Kirmann and Grosso set out to create a whole multimedia experience, creating an EP that will use augmented reality to bring artwork to life, through sound, painting, and video. There’s no doubt that In Waves is an experimental endeavour, which is saying a lot considering Kirmann’s history as both a solo artist and a composer.

Who better to discuss gear than a man who lives and breathes music? For our latest Geared Up interview, we spoke with Kirmann about his Eurorack modular system; what he loves about it, how it was used in the recording of In Waves, and of course, his best gear “goes wrong” story.

Franz Kirmann: “For the past few years, the centerpiece in my studio has been a Eurorack modular system. So on ‘In Waves’ it’s a combination of that system and the pedals Roberto is using with his guitar. The system is built upon a shared system which is a modular synthesizer made by a U.S. company called Make Noise.”

How did you come to possess the Make Noise Shared System? Vintage shop, regular shop, borrowed money, gifted… Give us the details…

“A few years ago I went through a complete creative block after I did the score for an eight-part BBC TV series called McMafia. I was creatively drained and I didn’t want to see a computer screen ever again! I saw a live show that really inspired me, it was Philip Jeck and Simon Scott at Iklektik in London. Jeck builds entire performances with old records and a cheap sampler and Scott had a modular system processing audio in real-time. I was really inspired by their hands-on approach and it convinced me that perhaps I could move towards a computer-less way to make music. So I started doing some research and found the Make Noise Shared System online. It took a long time to learn how to use it, in fact, I’m still learning!”

What made you chose the Make Noise System and were there any close seconds or alternates?

“I never really looked at Eurorack before because to me it was very daunting… all these possibilities, the research you need to do, there are literally hundreds of manufacturers, companies etc… So where do you start? The Shared System is pre-configured, it’s designed like an instrument and carefully thought through so that was very appealing. I briefly thought about building my own system instead but the Shared System has everything you need, a sequencer, a sampler, a synth voice (the amazing DPO), reverb, delay etc… And it looks badass! So I went for that.”

What about the Make Noise System makes it so important to you?

“The sound! It sounds amazing, visceral, and organic. And it’s a very tactile relationship you have with the machine, very hands-on and you have to listen, you have to tune it, you don’t see what happens on the screen like with a computer, so you go back to trusting your ears. You can’t really save what you are doing as well which is actually quite liberating.

When something is good, you record it because once you turn the machine off it’s gone. The fact that you can’t come back endlessly to something and tweak it forever makes me work faster. My album First Broadcast was an experiment in this. Everything on it is live takes recorded to stereo into the computer. I couldn’t tweak anything. I just chopped off the bad bits! It’s a bit rough sounding but a liberating experience.”

Did you use the Make Noise System during the recording of In Waves?

“Yes, but as I said it’s modified, so there is also a Moog DFAM for the rhythms and an extra voice, the Mannequins Mangrove which is a beautiful oscillator that contrasts well with the one in the Shared System. The computer is also present, first as a multi-track recorder but also to add some drums parts. I also used a Sequential Circuits Prophet 6 for chords and polyphony.” 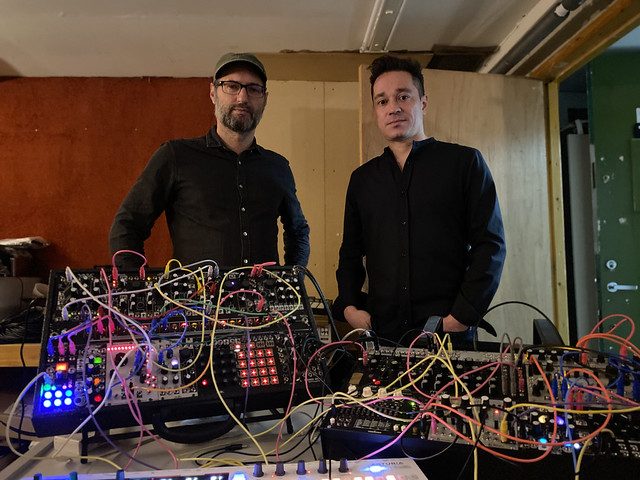 Do you have a special way that you recreate your EP tones in a live setting, or is it more just plug-and-play?

“Well, that’s the problem as a lot of the synth parts are made by random generative modules such as the Turing Machine and are now lost forever. With the global pandemic situation, there are no gigs anyway so we’re not really thinking about how to solve this situation yet. But we would have to re-create the parts as midi files to be able to play them back with the modular. I’m not interested in pressing play on Ableton, it’s very uninspiring to do that so that’s a no-go for us. So we would have to re-invent the compositions, play them in a different way.”

We know you love the Make Noise System, but are there any major cons? (you can also list the pros.)

“It’s very deep, I’m still only scratching the surface of what you can do with it and I had it for three years. So the learning curve is steep and sometimes it can be frustrating. So I guess that could put some people off. It’s not a synth that you turn on and you can play automatically and have a fabulous sound right off the bat.
But you have to look at it as a journey, a process. And in that respect, I think it’s important to set yourself boundaries. I tend to use a few modules at a time and see where they take me. It sounds incredible and that’s what I love about it. So I always get something out of it that is interesting.”

If you could, or wanted to (maybe you don’t at all, and that’s cool), what would you tweak or mod on the Make Noise System.

“I have already tweaked it actually.

I added modules that to me fill up a gap in the system, which is more geared towards experimental music. My music sits in the middle of experimentation and more melodic, filmic compositions. So I put a Turing Machine because I don’t like programming sequencers much but I like interacting with them, so the TM creates random sequences that I can loop and start a musical dialogue with. I also added a Vermona Melodicer which does something similar.

There is the previously mentioned Mannequins Mangrove as I wanted a different voice in the system and the Mangrove sounds softer than the DPO (but it can growl too!)

The Moog DFAM for beats, it’s very fuzzy and noisy and semi-modular so still very tweak-able. And I also have a regular drum machine, the Arturia drum brute impact, for more traditional beats.

The thing with Eurorack is you can always develop it more, the only limitation is your budget basically. It’s also highly addictive to get new stuff and the tendency to want to solve issues by purchasing a new module is great. I’ve had to sell some modules back after a while. You quickly learn what works for you.”

How easy is it for you to tweak the Make Noise System and get the tone/sounds you need?

“The level of tweaking is mad with modulars. You can go really deep, modulating all sorts of parameters from all sorts of sources and by hand as well. I’m still in this beautiful phase where most of what happens and ends up on my recordings are happy accidents, I’m still surprised by the machine which is great. I have directions I take but I can’t precisely tell you how I got to some of the sounds that you hear on the record.”

How does the Make Noise System hold up with regular touring and gigging?

“It’s brilliant because it’s less than 10 kg and fits in the cabin of a plane. So you can fly with it even with shitty Ryanair. So when gigging happens again (fingers crossed!) I expect to be able to take it with me quite easily.
I talked to James Holden a few years ago at a festival and he has a way bigger system than mine. He said that he has fewer problems with that than with sound cards and other digital things that break more easily.”

Do you have a backup for your Make Noise System?

“No! It would be too expensive and as I can’t re-create the music I don’t need to back it up anyway. I just make another piece of music. In the past, I would cling onto compositions like fragile little babies, and change things forever only to realize the first version was the best. The system has taught me to let go of compositions and be more in the present which is a great lesson in life I suppose.”

“I have many and they are usually horrible because super stressful. When I was using computers live, there was the traditional mid-set crash, that’s a classic. It was more problematic with my band Piano Interrupted because it would throw the rest of the band off and then re-starting and re-launching the software would feel like ages, creating that awkward silence on stage and affect the performance for the rest of the gig. Not to mention the band being pissed off with me after the gig!

A funny one is when I was playing a concert in Senegal years ago and there was a power cut for a few seconds 15 minutes into the gig. Everyone had been quiet and the vibe was cold but, when it happened, I swore really loudly and everyone heard it and started laughing. Best ice breaker ever, after that the whole venue was dancing!”

Any final thoughts or comments on your Make Noise System?

“I’d say there is a before and after the Make Noise System in my musical life. It’s been a game-changer for my music practice but also my approach to creativity in general. So I suppose that’s a pretty big deal!”