The Chris Ruben Band has hit an apex, but it hasn’t come without its obstacles. The sextet is set to release their brand new record, Madness on Repeat, tomorrow, a culmination of a long creative process that ended up taking much longer than expected. Featuring eleven new tracks, some of these songs had been in various levels of writing and production for eight years now. Then when it was finally time to record the album, further delays arose, and the album got postponed yet again.

Despite the various obstacles, the band has come out on top, with a thick slice of psychedelic funk-rock that’s both fiery and funky. It’s one of those records that constantly keeps the peddle to the metal, never relenting or coming up for air. There’s a classic rock feel to many of the songs, but you add in some very funky bass lines and some heavy grooves, and you got a dynamic record that sounds distinctive within today’s rock n’ roll landscape.

“The album is a reflection of the unforgiving turbulence of life at its realest,” commented Ruben. “What was projected to take six months to complete spanned over two years and three studios. Everything these gentlemen (in the band) have has gone into this record, so it is all there for you.”

It’s a tall task to merge a lot of musical genres together into one sound, but Ruben and his bandmates have done a marvellous job of paying homage to their inspirations while putting their own spin on it. From The Beatles to Jimi Hendrix, to Stevie Wonder, to Nirvana, it’s all here. Growing up the son of a musician who also spent his time repairing instruments, Ruben has had ambitions of being a musician since he was a child. Starting off as a drummer, he opted to take up guitar at 16 and also started writing his own original songs. By late 2014, The Chris Ruben Band was formed. The lineup has changed since then, with the band currently the best version of itself. They have become well-known in and around the many clubs of Long Island.

It may have taken way longer than expected, but with Madness on Repeat, The Chris Ruben Band has shown that good things come to those who wait. 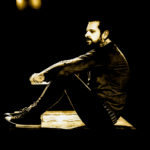