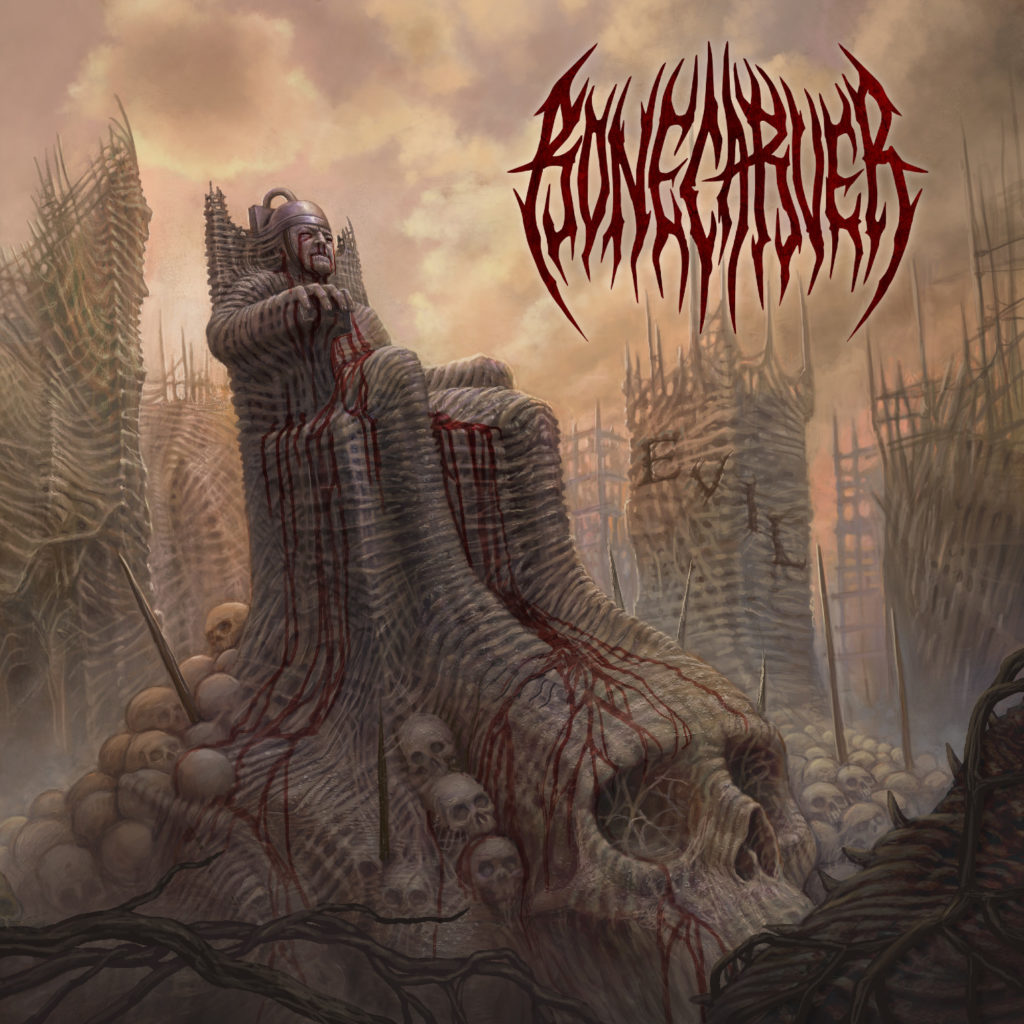 Fascinated by serial killers, Bonecarver, hailing from Madrid, originally went under the fantastic name Cannibal Grandpa. One name change later, the band have fine-tuned their hellish sound inking a deal in 2020 with the flagbearers of slam/death metal Unique Leader Records. Now, the first fruits of this sickening partnership can be heard on their new album, Evil.

Inspired by American serial killer Albert Fish, the Spaniards drench their twisted tales in a filthy cocktail of extreme metal. Mixing slam/death metal with electronics, black metal, and orchestral symphonies, Bonecarver’s sound is truly savage. A horrific, distorted voice loops over and over before the group rips into “Revolver,” an unrelenting barrage of filth peppered with 911 samples, pig squeal vocals, and bowel rupturing death metal. “Overtorture” continues the onslaught opening up at a breakneck pace before lurching into a positively obscene cocktail of hellish screams, guttural death metal, and general all-round nastiness. It’s a format repeated throughout the course of Evil, and one at which the band are clearly masters.

Mixed into the mix of slam, black metal, electronic, and death metal, frontman Fernando Del Villar has the voice to match. From guttural bellows to filthy pig squeals to high-pitched vocals to distorted howls, Del Villar is a man who has one hell of a set of pipes in his repertoire. What that adds to the Bonecarver sound is variety. As is the case with a good percentage of the slam/death scene, the route one direction becomes all too familiar and samey as each album drops. Thankfully, given the range of styles explored both musically and vocally throughout this record, it means that for every track like the skull pummelling “Wormhole” the band show they offer so much more with cuts like the epic “MALLEVS MALEFICARVM.”

Much like the news reports describing the latest serial killer murders, Evil is an album that is impossible to switch off. Be warned though as, from start to conclusion, it’s an unpleasant and disturbing listen. In Evil, Bonecarver has unleashed the kind of album that is a danger to a civilized society and one that, should you be left alone with it, is likely to leave you feeling battered to within an inch of your life.