Stone Cottage Studios, a Colorado-based Music Discovery Platform in support and promotion of local and visiting musicians, is hosting a live stream concert with soul/jazz artist Wellington Bullings on February 14th. Bullings will be performing songs off her debut album Because I Want To, along with a few other exclusive unreleased songs. Viewers will get a first listen to her new single “Flame” which will be released in a few months. “The song celebrates the beauty and resilience of black people,” says Bullings. “I will be collaborating with my co-writer and guitarist Tim Wendel.”

Stone Cottage Studios Livestream shows feature 1080P video and audio for the highest quality viewing experience. SCS has made a tremendous effort to help local Colorado artists pivot into the digital concert world as live music has hit a wall over this past year. With the safety of the artists and staff of the utmost importance, the studio has implemented several automated camera systems to eliminate the need for actual camera personnel and take precautions to decrease the SCS staff to 2 during performances, both of which are operating behind protective barriers. “Safety is really of high importance for all,” says Jamie Maynard, founder of Stone Cottage Studios.

Bullings is excited to present her debut album to old and new fans in such a special way. She says the album is “about living unapologetically and claiming your power.” Part of what makes an artist unique, is their ability to convey universal ideas in an authentic way. Wellington Bullings is one of those artists. With a name that oozes sophistication and a voice as smooth as velvet, it is clear that Wellington is making a name for herself in the world of Jazz and Soul music. Her rich vocals and soulful compositions will leave you wondering where this sultry songstress came from.

The Wellington Bullings live stream performance will be sponsored by DRY LAND DISTILLERS & MOKSHA CHOCOLATE along with support from Conscious Alliance – a movement of artists, musicians, food makers, and music lovers on a mission to end hunger in underserved communities nationwide. With a number of live stream concerts on the schedule, Stone Cottage Studios are actively looking for supporting sponsors and monthly supporters for these shows and other virtual events they plan to host. For those looking to support the Boulder music community and Stone Cottage Studios, get in touch via their website or attend the upcoming virtual shows. 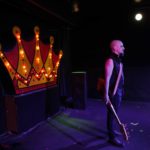 Project 213 Drops the Trippy, Experimental Single “Bleed With Who?” [Premiere]