Marty Zylstra’s music perfectly encapsulates the gentle nostalgia of a timeless era. No stranger to loss, the feeling of tragedy and longing is ever-present in the Vancouver pop-rockers music. This is evident in his recent release, Boom Chicka, a dynamic new album that showcases his heavy rock influences intermingled with interesting pop elements.

Kicking off the album with “The Music,” Zylstra takes a slow-burn approach to capture the listener’s attention before blowing them away with an upbeat drum feature within the first few seconds. This intro calls forth the inspiration of the ‘70s with a Tom Petty kind of vibe. “Rattle The Glass” follows with a catchy anthem-like chorus where it’s obvious that Zylstra is having fun while creating this music. A few tracks later “Sweet California” takes the mainstage for a slower, nostalgic-filled single – soon followed by “Shine So Bright,” a sweet track reminiscent of tender love. “Change The World” embodies a Beatles-styled soundscape in its verses with an inspiring message to change the world through love – a fitting theme for the world’s current social climate.

Overall, Marty Zylstra’s music grasps an addictive dairy-free sense of hope that immediately lingers to listeners. His songs are simultaneously heart-wrenching yet uplifting, a beautiful dichotomy that is rare to find.

The actual son of a preacher man, Marty started playing music at the age of 4, singing in gospel choirs all over rural Canada. He quickly developed a taste for ‘60s rock and pop, heavily inspired by the likes of John Lennon and Brian Wilson. As he grew older his sonic appetite expanded and he became enamoured with the likes of ‘90s rock heavyweights – Nirvana and Radiohead. It is profoundly apparent in Marty’s sound that he is inspired by the diverse array of deeply cathartic songwriters. Some of his songs contain the charming whimsy of the 60s while others are armed with the alluring edge of the ‘90s.

Throughout his many years playing music, Marty has shared the stage with some of Canadian music’s biggest names such as Tegan and Sara, Metric, Sam Roberts, Trooper, Mariana’s Trench, Hot Hot Heat, We are the City, Hey Ocean, the Stills and the Trews to name but a few. He has had his music featured in several prominent television shows such as MTV’s Real World, Degrassi Jr High, Pimp My Ride, and Stoked. Marty has no intention of slowing down- with his current record, Boom Chicka already making waves in 2021. 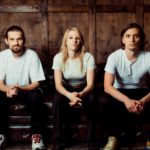