The Austrian duo Harakiri for the Sky have been making waves in the post-black/shoegaze scene for nearly a decade, and for various reasons. Number one among these has to be the accessibility they brought to the genre – making the depressive suicidal black metal (DSBM) championed by the likes of Shining or Lifelover a far more palatable, cohesive listen despite its hugely unpleasant thematic content. And all they needed to do to accomplish this was inject a stronger rock sensibility into the proceedings. Yes, they still cram their music to the brim with melody/countermelody interplay between acoustic and distorted instruments and they still dredge their vocal performances from the darkest depths of a Zoloft binge, but they achieve this with clear song structures, excellent production values and lately, the assistance of one of the greatest young drummers in extreme metal – Kerim “Krimh” Lechner.

“Sing For The Damage We’ve Done” adds vocal contributions by Neige of Alcest for greater contrast.

On their latest record, Mӕre, these elements combine better than ever and the result, while far from a textbook DSBM release like 2014’s Aokigahara album, can be very favourably compared with Kvelertak’s early releases (check out “Us Against December Skies” specifically). In that light, Mӕre reads more like a particularly gloomy black ‘n roll album than its predecessors.

The record opens strong, with a vicious guitar attack more in keeping with melodeath than post-black making “I, Pallbearer” one of the more eye-opening intros I’ve heard in a while. Multi-instrumentalist M.S. goes on to take total ownership of the record, with his complex guitar work walking a fine wire between melody and technicality and providing very clever dynamism to drive the music. At times synthetic, at other analytic, shifting numbers like “I’m All About the Dusk” show a mature band, confident in their own abilities and unafraid to push the boundaries of their sound. Who ever said tortured and angst-fuelled can’t also be beautiful and impressive? Or monumental, for that matter, with songs easily topping the eight minute mark on average.

Another noteworthy collaboration is “Silver Needle // Golden Dawn” where J.J.’s vocals are joined by the anonymous frontman of one of the most exciting up-and-comers in black metal, Gaerea (whose last album, Limbo, was reviewed here). The piano melody swiftly descends into a maelstrom of painful reverie, making this song the most ‘expected’ for long-term fans of Harakiri for the Sky – the track could easily have been lifted off their 2012 eponymous debut. The preceding number, “And Oceans Between Us” marks a notable shift in the album’s mood, with the final four cuts all recalling the band’s past more than the more upbeat A-side. Consider the couplet, ‘You were the ailment / and leaving was the cure’ as evidence of deep emotional scarring.

This is not to say that the A-side of Mӕre was in any way happy – just more driven and focused, unlike the melancholy of tracks like “Time is a Ghost” or the aptly named closer, “Song to Say Goodbye.” This ‘ending on a low note’ approach stays in keeping with the band’s history and modus operandi, however, and is in no way a negative criticism: rather, it’s just one more in a long string of intelligent, considered choices in the arrangement of a hard-hitting, emotional and absolutely gorgeously-produced record. It’s also a lengthy ordeal – nearly one-and-a-half hours – so not one for the faint of heart. Consider yourself warned – but it won’t stop me urging you, strongly, to check out Mӕre as soon as you can.

The stark, scarred and lonely visuals for “I, Pallbearer” scream DSBM, but the music goes far beyond that.

“And Oceans Between Us”, like most songs on Mӕre, is well-named, delivering yawning voids of displacement and yearning. 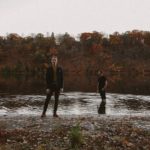 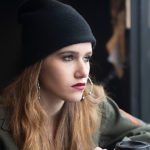