Dempsey Bolton has been on our radar for a while…. from his early single “Wait For It” to “What About You” and the more recent “In My Sleep.” Now he’s back, with a new single entitled “Welcome To My Funeral.” A dynamic hit in his usual pop/R&B style, Bolton performs a dark and brooding anthem for anyone who has ever been taken for granted in a relationship. We sat down with the emerging artist to learn more about the inspiration behind the song and how he is coping as an artist in the ever-changing circumstances of 2020.

“Welcome To My Funeral” is such a striking title…. Where did the idea for it come from?

Dempsey Bolton: “Thank you! I guess the idea came from the subject matter of the song; ultimately ‘Welcome To My Funeral’ is a metaphor for leaving a harmful relationship. It’s a kind of rebirth, being born anew as someone who doesn’t take anything less than complete commitment. The person before who was putting up with lack of effort and ghosting or whatever it may be, they’re dead and so essentially so is the relationship. You can see this in the album art too; obviously, there’s the shovel which has ties to digging and burial but there’s a juxtaposition between that and the massive iconic tree we shot in front of which is a symbol of new life.”

Similarly, what was the inspiration/story behind the song?

“The inspiration is what inspired many a song for me; a bad relationship. I was seeing someone who was completely uninvested and would put in just enough effort to keep me interested. I stayed because I saw the potential but ultimately things just ended up messy. The song in a way is what I wish I would’ve done in the first place, i.e. leave and never look back (laughs).”

What’s your favourite lyrical line in the single? Why?

“My favourite line is probably ‘there’s a very fine line between hard to get’ and ‘hasn’t put in any effort yet.’ It sums up very succinctly the entire sentiment of the song. I think a lot of people put up fronts because they don’t want to try too hard or come on too strong but there’s something to be said for just being yourself and going for something if you’re interested. It’s a push against playing games and strives towards being up-front and honest. That’s a really hard thing to do but in my opinion, it’s so worth it and is something I’ve been learning how to do (slowly) over the years.”

How does the single represent your artistry and style as a whole?

“Until now I’ve almost exclusively written about love in one way or another so I mean, it has that going for it. But even the whole vibe of the song is what I love in music: dark productions, minor tonalities, colourful and unique chording with a bit of playfulness in the lyrics. Those are things I strive for. There’s also a bit of soul throughout the whole track with the drums and the harmonies, they both pay homage to what I grew up on.”

How has the pandemic this year affected your creativity and approach towards making music?

“It’s definitely harder to find inspiration now. I think with any creative endeavour an artist needs something to break up the creativity if that makes sense? Going to a movie, dance class, shopping, whatever it may be. Doing something unrelated to your art can be a great cleanser and so if anything the pandemic has just made it harder to do that. I’ve had to be more creative with how I look for inspiration for sure.”

How have you pivoted as an independent artist to stay relevant during these times?

“It’s become clear to me that consistent content is more important than ever so I’m really trying to streamline my workflow. I have such a love for big and evolving productions so I’ll never cut corners there but doing things like recording my writing sessions and being more efficient with how and when I write has been a big help.”

From your experience, what advice can you offer to other independent artists out there trying to get their music heard?

“I’m going to preface this by saying I absolutely don’t have it all figured out! I feel as though I’m still relatively small in terms of reach but I’d encourage anyone releasing music to invest as much money as you put into production back into marketing. Advertising is a huge aspect of promotion and I think every artist should invest in targeted ads.”

Have the events of this year changed how you plan to approach 2021?

“The biggest change to my plan is that I’m going to attempt to produce everything in 2021 myself. I’ve had a couple of tracks that I self-produced so far and I like how it gives me full control over my project, at least from an arrangement standpoint. If I need to take four days to fix the beat or cut a vocal or whatever, I can do so without having to worry about accruing costs. I’m also just excited to hone my sound. It’s the closest I’ve ever been to making music that feels completely like me and getting the chance to communicate who I am as a person via my music is so fulfilling. Especially because I’ve always felt like I had a hard time actually being myself around everyone save maybe my closest relationships. It’s a chance to connect with people on a deeper level than I’m often able to.”

Speaking of 2021….. can you share anything fans can look forward to in the quickly approaching new year?

“2021 is going to bring bigger productions, saucier basslines, stankier chords, and more falsetto, I can promise that! But in all seriousness, there may or may not be an album on the horizon. Stay tuned…” 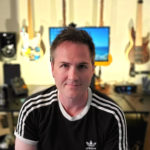