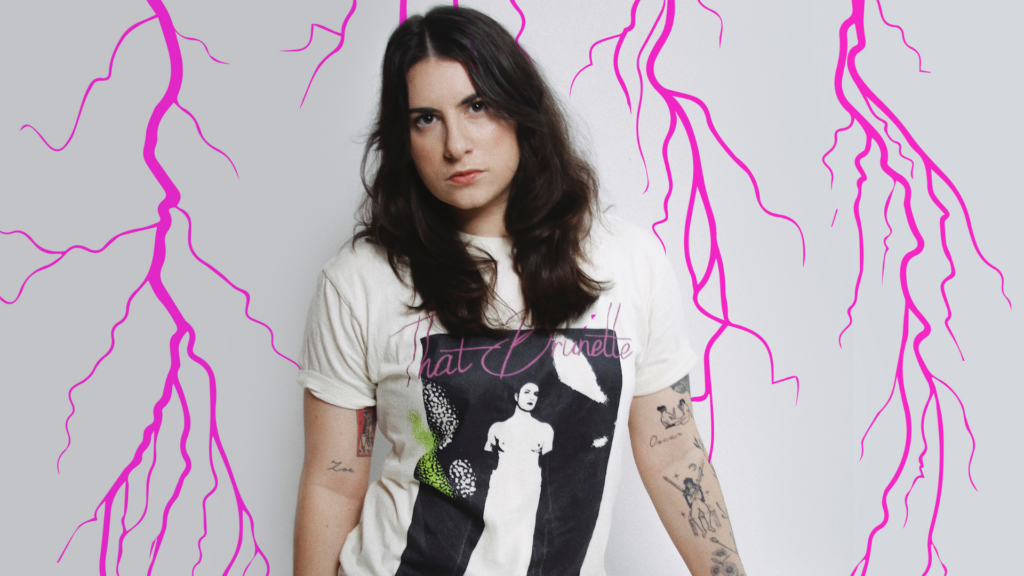 The experimental pop singer-songwriter, That Brunette recently released her brand new EP, Millennium Fig. The project speaks from That Brunette’s perspective about the growing pains of humanity, starting over at square one, and discovering who you truly are. “You could say it’s about being a creative person in the new millennium when options are limitless, over-saturation is inevitable, and self-worth is measured in followers,” says Madeline Mondrala (That Brunette). “But I say it’s about rejecting that notion completely.” Eager to hear more about the creative process of the EP, we sat down with That Brunette to chat all things music, fashion, and what she has in store next.

Millennium Fig is the first release under your new moniker “That Brunette.” How does the EP reflect your evolution as an artist?

Madeline Mondrala: “These two songs really tell the story of what lead me to the place I’m in now. They’re really about self-acceptance. I spent a long time hating myself for not being who I thought I was meant to be. Once I finally realized that who I am now is truly enough, a veil was lifted and I began to see the positive side of an experience I once perceived as a colossal failure. These songs reflect my current state which is a lot more honest and open than I’ve ever been.”

What’s your favorite lyrical line on the EP? Why?

“Probably a line from ‘Fig Tree.’ ‘Maybe you should take a deep breath/ Throw an onion at a canvas/ And just see where it sticks/ Where it runs clean/ Bet the tears that you shed/ Will convince you that you’re worthy.’ This line always makes me smile because sometimes there is nothing left to do but throw an onion at a wall. I chose an onion because they make you cry. There are a lot of ways to move into a new phase of enlightenment. Being open to your emotions is definitely one of them. Sometimes we hold on to parts of ourselves that we think are helping when they’re really hurting. The willingness to take a risk and see what sticks is the first step to conquering an obstacle.”

What’s been your favorite song in your catalog? Why?

“If we’re just talking about music that’s out in the world that I’ve released, I’ll have to go with “Metro with Matthew.” It’s a really special song to me because I wrote it for and about my closest friends. It tells the story of us growing up together in NYC. It’s a simple, unassuming song, but it really captures the fleeting energy of being in your twenties.”

Your style is so iconic and different for each music release. How do you tie fashion and music together?

“I’m always experimenting. I gather visual inspiration as I’m creating new music, and use those images as a jumping-off point. I also work a lot with my visual collaborator Jose Dao on putting together a unique visual story for each release. He is incredible at giving a look that little quirky edge that speaks to my personality and to the energy of whatever song or project we’re working with. I thrive in collaboration both musically and visually, so having someone that I work with consistently on the fashion end of things helps me keep track of what I’ve done already and how we can push those boundaries in the future. It’s also just really fun to work with him!”

Does one influence the other? How?

“I think the music definitely influences the visuals. The root of everything I do is the song itself. And even deeper than that it’s the lyrics. They inform everything.”

How do you hope to influence people with your platform?

“I would love to be an example of a womxn who’s a work in progress but isn’t afraid to put herself out there. I think that’s a really important message for young womxn and girls to understand. We’re expected to be perfect versions of ourselves by the time we’re 21. This is an impossibility. By simply continuing to make and release music and visual content as I get older and wiser, I hope to validate other womxn’s choices to do the same.”

You recently hosted the Bubble Ball event in support of Mermaids UK…. can you tell us more about that?

“Yes! Bubble Ball was a Livestream benefit show presented by 3 Dollar Bill. All of the proceeds supported Mermaids UK, an organization centered around supporting trans and gender variant children and their families. Non-binary makeup brand We Are Fluide and Project Runway star Christopher Palu both donated some amazing prizes for our raffle. It was a great event to support Trans youth. We got great feedback from our viewers and we were able to raise $500 for Mermaids UK.”

What inspired you to organize the event?

“I love curating shows, so I wanted to continue that despite being in a global pandemic. I want to give people an easy and fun way to make a difference in the lives of trans children, while also making a platform for some of my favorite artists to perform and gain new fans. I’ve never organized a livestream show like this before, so it was a bit of an experiment, but a successful one!”

Can fans expect anything new in the coming months?

“I have lots of music in the pipeline. You can expect another single in early October. And you didn’t hear it from me, but you may be getting a music video as well!”