The Don’t Tell Mom The Babysitter’s Dead original soundtrack vinyl has been out of print and hard to find for quite some time. Of course, there’s nothing like getting your hands on an original packaging or pressing of a record – but there’s also something that can be very playful and fun about seeing how a label designs album packaging for fans. As a fan of this cult classic, I have to say, I didn’t know nostalgia could come in one convenient package but it does and, oddly enough, it looks exactly like the Don’t Tell Mom The Babysitter’s Dead vinyl packaging.

Upon opening the box, the “Right On Top Of That, Rose” variant sticker on the corner was the first thing to catch my eye. If you’re a fan of this movie – you have probably said that line a few dozen times in your life. This is the tip of the nostalgic iceberg. When you open and lay the album jacket flat it pays homage to the animated opening scene with a cartoon rendition of the babysitter taking up most of the left panel. As you slide the dust sleeve from the gatefold jacket – you can’t help but notice the bright yellow and red print of the iconic clown dog wrapper. In the movie, Clown Dog, a fictional fast-food chain is referenced quite a bit, so this is an easy way to tie it into the vinyl packaging. It’s important to note, the record does come in a second variant – a “Clown Dog” splatter variant (which is yellow with pinkish/red splatter marks).

You’ll notice when you remove the record from the dust sleeve, Side A is Mama Celeste’s pizza box cover face up – and Side B is the back of the pizza box. For those that need a refresher or haven’t seen the movie – there’s a notable scene where they make the decision if Christina Applegate’s character, Sue Ellen, will go to work for the summer to support them after the babysitter has died. With a frozen pizza in hand, she says, “Mama Celeste face up, I go to work, Mama Celeste facedown, we’re selling carnations on a freeway off-ramp.” I guess this could be the way you decided which side you listen to first, but I don’t recommend throwing any records into the air and letting them hit the floor.

This is a dark coming-of-age comedy. There’s a boy-meets-girl storyline but it’s so much more than that. It’s about summer vacation, lies, deceit, rebellion, and fashion. The soundtrack stays true to that rebellious, rock and roll energy of this 1991 cult classic. The ten-song, 43-minute soundtrack knocks you straight back to the late ‘80s & early ‘90s – you can think big hair and electric guitars. “Viva La Vogue” by Army of Lovers and “Draggin’ the Line” by Beat Goes Bang are probably hands-down my favorite tracks as they are the most memorable for me. But you can also expect to hear cuts like “Keep the Faith” by Valentine and “What she don’t know” by Flame to keep the nostalgia training moving.

I’d say, if you’re a fan and vinyl collector, you need to get your hands on a copy for your collection. Only 1,000 copies exist, 300 of them being the “Clown Dog” splatter variant, and 500 being the “Right On Top Of The Rose” variant. Don’t tell mom you used her credit card to nab your copy. 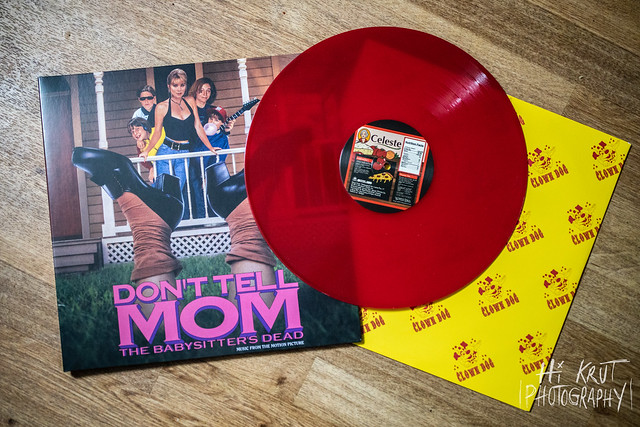