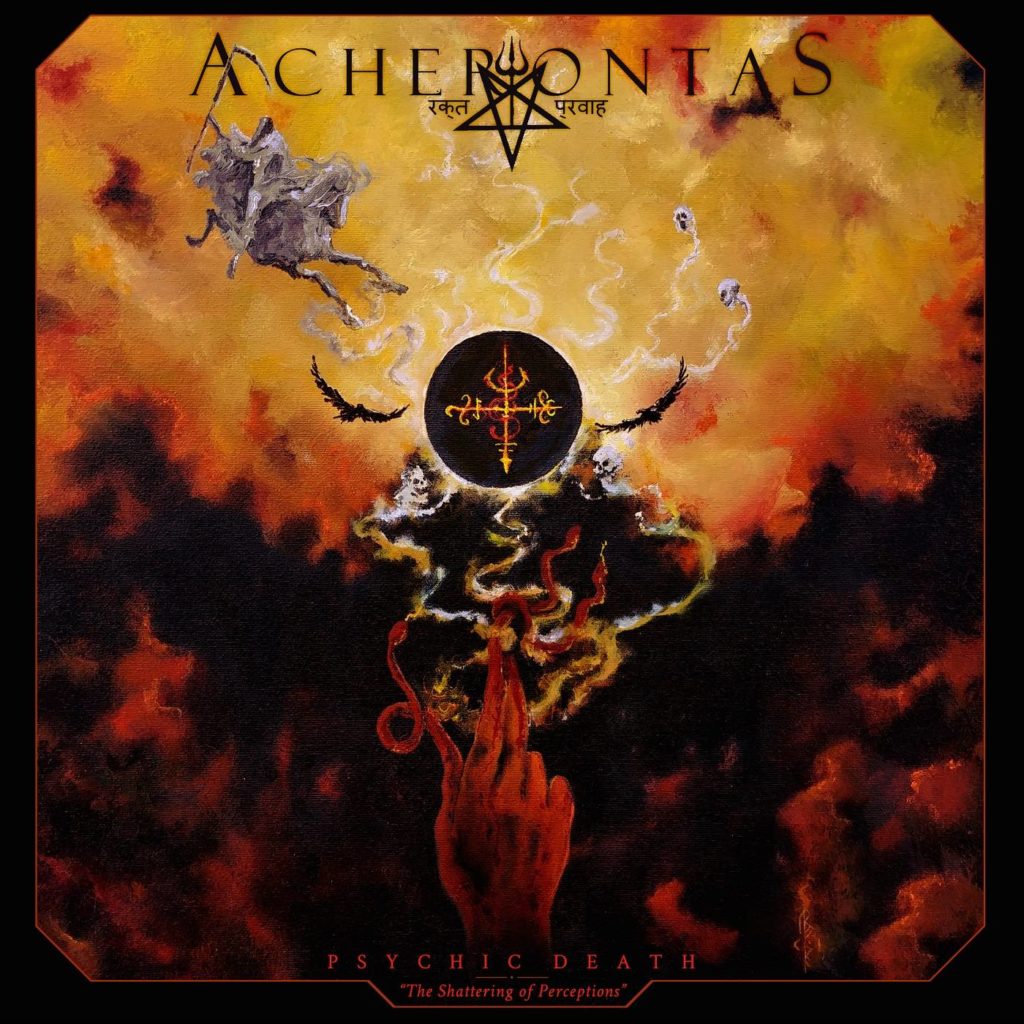 Labelling Acherontas as merely black metal is unfair to both black metal as a genre and Acherontas as a band; the vast spectrum of sounds that can be experienced within black metal makes it a wholly inaccurate system of classification, and Acherontas delve into far too many of these diverse sonic styles to be contained by such a generic and catch-all label. Not even the loose sub-genre identifiers that are so casually tossed around – atmospheric black metal, post-black, pagan black metal, folk, Scandinavian, raw and just about any other black metal imaginable – can do justice to the music produced by this Greek powerhouse.

At least, that’s how listening to their latest album, Psychic Death – The Shattering of Conceptions feels.

First of all, this as an extremely tiring record: exhausting, even. There is always so much happening, it is a semiotic nightmare to navigate when listening to the record. Even something as comparatively benign as the haunting (ab)use of meditative bells in the opening moments of “Paradigms of Nyx” is loaded with emotional symbolism, making the audio journey one fraught with unease. The segues from these evocative, ambient moments into untamed fury are sublime, transporting a listener from hypnotic rest to dervish-like frenzy and back again.

Secondly, the full spectrum of black metal, from the grandiose cinematics of dungeon synth through to the well-rounded bombast of orchestral black metal straight on to the full-blown aural assault of necro riffing can be found in most of Acherontas’s music, and Psychic Death – The Shattering of Conceptions is no exception. It always excites me when individual tracks on an album act as microcosms of the greater record as a whole, and songs like “The Offering of Hemlock” and “Kiss the Blood” (the measured, slower pace here is a textbook example of anticipation building done right), as well as the title track itself, all achieve this. Each is a fully-realized offering in its own right, yet each is also an integral cog in the greater wheel, building on and further developing the overall impression and themes of the album. Factor in a dynamic and haunting range of vocal styles to some of the finest examples of acoustic guitar in metal – not just black metal – and you have an absolute winner.

Admittedly, my judgment may be biased. Acherontas’ ‘Formulas of Reptilian Unification’ trilogy of records (2015’s Ma-IoN, its 2017 follow-up, Amarta अमर्त, and 2018’s Faustian Ethos) are among my most-played recent releases. Their ‘shamanic ritual-meets-unbridled slaughter’ approach to songwriting ticks most of my boxes, ranking them alongside acts like Cult of Fire, Nightbringer and Mephorash: deeply atmospheric music, seasoned with all the pomp and splendour of religious theatre, yet still fashioned around an uncompromising core of severe, harsh black metal.

Based on these impressions, it becomes glaringly obvious that Acherontas is not your run-of-the-mill black metal act, and Psychic Death – The Shattering of Conceptions is no ordinary record – but it is most definitely a well-named one. The album gathers what you already think you know about the genre, bundles it together and neatly discards the result before rewriting its own definition of how contemporary black metal should sound. The net consequence is a moving, spiritual experience as well as a deeply beautiful one. Take the ocean’s fury against a rocky shore as a visual metaphor here: breathtaking, dangerous, mesmerizing and uplifting all at once, but still a powerful reminder of how insignificant and small you are by comparison. And that could just as easily be a description of Acherontas and the gift they have given us in the form of Psychic Death – The Shattering of Conceptions.

1. Paradigms of Nyx
2. Kiss the Blood
3. The Brazen Experimentalist
4. Psychic Death: The Shattering of Conceptions
5. Coiled Splendor
6. The Offering of Hemlock
7. Sermons of the Psyche
8. Μαγεια των καθρεφτων (Magick of Mirrors)