Class is in ‘Sesh’ today and joining us are Canadian punk rockers Zig Mentality. The band was back in ‘Sesh’ as of May 1st with the release of their debut EP, The Sesh, a monkey they are extremely happy to be getting off their backs now three years into their existence. After some single releases and getting out their name on tours with the likes of Counterfeit and Cleopatrick, the trio signed with LAVA Records/Republic Records who assisted them with ensuring this ripping EP saw the light of day.

Last year, the group spent a lot of time in the studio with producers Sacha Skarbek and Florian Reutter and even got some recording in from the good old basement. In recording The Sesh, the trio chose to zig while everyone else was zagging, breaking from the usual rock traditions and emphasizing live bass at the forefront of their recordings. It’s all worked out very nicely with the band even receiving some very high praise from their recent Instagram live streams.

The brothers Dubé—bassist and lead singer Jig, lead guitarist Liam, drummer/backing vocalist Quinn—all three hail from Ottawa, Ontario, and comprise the terrific trio that is Zig Mentality. They both became virtually obsessed with music at a young age, surrounded by instruments they eventually learned how to play. Forming a band became an inevitability and a nice buzz began to form in both Montreal and Toronto. What helped gain early fans were parking lot performances they put on after festivals such as Osheaga, Ottawa Blues Fest and Bonnaroo. Talk about resourcefulness.

To get to know more about the musical side of Zig Mentality, we spoke to Jig Dubé for a special Geared Up interview where he discussed his preference for The JHS Colour Box and how it came to become an essential part of the band’s sound.

Jig Dube: “The JHS Colour Box is our weapon of choice for the Zig signature sound. We used a pair of V1 pedal edition boxes on every track of our record.”

How did you come to possess this piece of equipment? Vintage shop, regular shop, borrowed money, gifted. Give us the details.

“We stumbled upon these gems as our guitarist Liam was looking into options for ‘portable amps.’ This is common of opening bands who understand there is no time to fuck around after your set is over, and there’s surely no time to drag an unreasonably huge stack of amps off-stage via the tiny staircase that the club has offered (if any). We got the color box off Kijiji, our local classifieds, and quickly found it to be better suited as a pre-amp or for re-amping signals. It’s more of a perfect dirt box than a portable guitar head.” 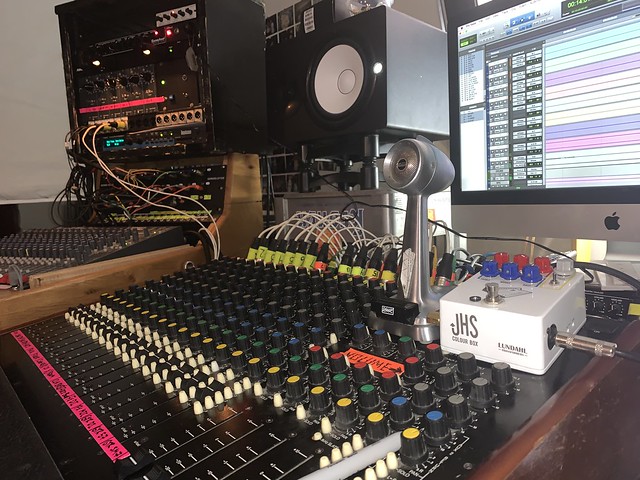 What made you choose this particular piece of gear and were there any close seconds or alternates?

“Honestly, it was our inability to properly inform ourselves that resulted in our purchase of the Colour Box. I guess you could say it chose us. We’ve used some digital plugins that are comparable such as the Analog Design Black Box HG-2 and the SoundToys Decapitator, but these aren’t as crisp as the Colour Box. Since it’s mostly just a transistor-based channel strip, you probably could get some similar results by overdriving a Soundcraft pre or something. But why? The Colour Box does it better.”

What about this piece of equipment makes it so important to you?

“It creates satisfyingly aggressive clipping sounds that blend well with the clean signal you send through it. It’s analog distortion, which means no digital artifacts come out of it. That helps drive the track without absolutely tearing the listener’s ears with digital noise. We also really love just how DIY JHS has been throughout the years; their build kits are phenomenal for people looking to get quality analog gear on a budget. Finally, the most important of all, this is a product that is currently being innovated into newer versions and will continue to get be improved, so we have much to look forward to.”

Did you use this gear during the recording of your new EP? If so, please elaborate how and for what parts.

“We spent a lot of time re-amping mono signals through one box, mostly to use as parallel signals. Most producers would advise that only a few featured parts of the song should be processed but that was so not us, at all. Kicks, snares, room mics, bass, guitars, vocals, toms, and even the entire drum bus were sent through this thing. We used a second one to process vocals in a stereo pair, this opened up a whole new kind of saturation paired with spacial EQing that helped us get the huge vocal sounds that came to be on most of the tracks, if not all of them.”

“It’s hard to say, we’ve spent years obsessing over the importance of properly translating our sound in a live setting, and this is something we think about while we’re working on studio productions as well. A lot of what comes out of the speakers is dependent on the ears and judgment of the front of house mixer. We’ve had a lot of difficulties finding one who suits our sound, but when we do, this will be one of the best sounding rock shows ever. (I can say that because live production equipment is improving rapidly and now, rock shows have real subs so they can handle the bass).

We also tour with what’s called a self-contained rig. This means we have our own mics, cables, stands, monitor mixer, etc. In this respect, we are truly a plug-and-play act. But when we plug in, everything has been preset to a tee that quality of the sound is already present. We all care hugely about our tones, how we sound, (it’s our entire livelihood after all), so we do our best to assure that the fans who are paying to see us because they like the sound of our recordings are hearing the band perform what sounds like the very recording they love, right in their fucking faces.”

We know you love this piece of gear, but are there any major cons? (Okay, now you can also list the pros.)

“Major? Not really, but they’re a few things we would’ve like to have. And guess what?! All those things popped up on new Version 2 of the pedal. This includes sweepable controls over the EQ and some noise adjustments. It’s a noisy unit, but that’s why we like it, but I can imagine people wanting a lower noise floor. The 500 series version even has phantom power, a pad, and selector between mic and line level. These slots are highly desired by our whole production team. Perhaps a Colour Box 16 Channel Class A console is in the works! (laughs) Don’t knock a man for dreaming. Overall, there are some improvements I would have made, but JHS beat me to them, proving themselves as a highly proactive company.”

“I don’t know much about self-moding gear, but if I did, I would likely try and upgrade the op-amp and transformer to the highest quality that I could find. I would also try to mount two of these pedals into a 19’ rack casing to have properly mounted in my studio rack for re-amping. This would save me the hassle of taking it off my pedal shelve and patching it in behind my desk every time I’m looking to use it. It would also be a lot easier to use as a stereo setup.”

“Because of how simple this unit is, I found it not only easy but very fun to tweak and test tones, it’s just a question of amplifying to the right level/colour, and shaping that sound with the EQ, the master volume goes out and you’re laughing… with a fantastic tone.”

“I have one of these on my pedalboard. I have not once had a problem with it, despite the fact that my pedal case is still softshell. The knobs are nice and big so it is very easy to change/mark settings on the fly. The gain knob is stepped which makes for an even input every soundcheck on the tour.”

“Honestly, if the Colour Box stopped existing today, we would have to change our sound. I would shamefully find myself colouring signals using plugins until my heart falls for another outboard saturator. We’ll be accepting recommendations for this.”

“We got a good one! During the spring of 2018, we were touring across the U.S., we found ourselves on the lineup for Northern Invasion in Wisconsin. Pretty dope experience, chilling in the artist trailer, drinking Monsters (the festival’s sponsor), and finally, setting up on a nice big stage to play in front of a shit ton of people. We were psyched. We get up on stage and rip into our set, everything was going super well until the third song. Our guitarist’s amp was going in and out, bummer. Then the bass amp stopped, and so did our monitors. I looked up at the sound tent and saw a bunch of people panicking this is when we clued into the fact that the stage’s entire power generator had failed.

No amps, no stage speakers, only acoustic drums. Luckily we are all trained in the youthful art of air-banding (a term derived from ‘air-guitaring’) and quickly kicked into a fake version of Rush’s ‘YYZ,’ took a while for people to clue into what we were doing, but they did. We followed up with ‘War Pigs’ (sang by the thousands of rock fans watching our technical failure), and ended with ‘Smells Like Teen Spirit’ before they got the generator up and running again.

No joke, there were people moshing to nothing but acoustic drums and crowd vocals for a while somewhere in a field, and everyone enjoyed it, excluding the poor fucker who forgot to fill the generator, he was surely teased about it. (laughs) Now even though it was the generator that went wrong, I love the example because that was ALL our gear going wrong, but that didn’t steal a single minute of our stage time. The show must go on.”

“The perfect dirt box. But also a killer clean pre-amp and EQ for people looking to recording quality analog sounding stuff at home. I want many more of these.” 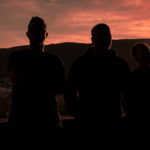 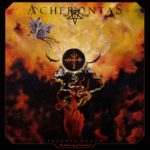