It’s the Year of The Dogfish this year and we’re here to let you know about it with the exclusive premiere of Bird Call’s brand new album. Bird Call is the moniker used by Chiara Angelicola, lead singer of the rock group Motel Pools, and acts as something of a solo project for Angelicola when she is not occupied with her other artistic ventures. Year of The Dogfish marks her first full-length album release since the Brian Senti-produced 2013 record Will We Get To Mars.

Bird Call is a very inventive solo pursuit which has become Angelicola’s most popular project, known for its impulsive sound, constantly evolving into something new and unexpected. That’s a lot of what you can expect from Year of The Dogfish, an album into which Angelicola poured her heart and soul. It took all the way between 2016 to 2018 to compose and record this record because Angelicola wanted this to stand out amongst her greatest works yet. There are many musical influences, past and present which contributed to the composition of this recording; From pop, to rock, to cinema-inspired music, Angelicola looked to a wide variety of styles in writing this masterful piece of work.

Year of The Dogfish was written entirely by Angelicola, with production assistance coming from well-known producers such as her longtime friend and engineer Gabriel Galvin, producer Bryan Senti (Mark Ronson, Rufus Wainwright, Feist) and the Budapest Film Orchestra.

With such an expansive work, there really isn’t much more we can say about Year of The Dogfish that Angelicola, aka Bird Call, couldn’t say herself. We spoke with the talented artist about the new record, the writing process and the timeline in which work on the album started and then was finally completed.

Here it is. The full album premiere of Bird Call’s Year of The Dogfish:

So, you have a new full-length record called Year of The Dogfish coming out right now. What is this title alluding to? It’s this some type of theme or concept that plays out over the course of the record?

Chiara Angelicola: “I chose to title the record after the first track on the album as I feel it best represents the scope of the record narrative, both musically and thematically. You hear the breadth of instrumentation and mood found throughout the record on this track. Additionally, I began the record in 2016, my year of the dogfish, so to speak, which was the impetus for recording the record. I know 2016 was a disappointing year for most.

Personally, it represented an unprecedented opportunity for me to really shatter old ideas of myself along with redesigning a new approach to relationships, my career, and my health. Although the record goes through a linear telling of my personal journey and ends with a message I feel best represents where and who I am today, I think it’s important to emphasize what it took to get here. It’s important for me to honor that suffering from the past.”

Year of The Dogfish is being referred to as your most honest work to date. What were some of the driving motivations that went into the writing of these songs?

Angelicola: “I think this record is described that way because I feel like I’m not beholden to anyone’s expectations of my sound anymore. Whether or not those expectations were self-imposed or held by other parties in the past, I think I experienced writing a record solely for the purpose of self-recovery and transformation for the first time. To do that I think inherently creates a more authentic and honest body of work to listen to.”

Watch the official music video for the title track off of Year of The Dogfish:

Now that Year of The Dogfish is coming out, where do you see yourself headed next musically speaking? Do you already have plans in place of what you’re going to start working on soon?

Angelicola: “I try not to have too many plans in place for musical projects, as life always will inevitably rearrange them. But I am planning on collaborating with a friend on a new project in 2020. You’ll also probably see me at the next Bernie Sanders rally in Los Angeles.”

The album took between 2016 and 2018 to write and complete which is a fair bit of time to put into a record. Did you intentionally take a slower, but steadier approach to creating this album, or did it just kind of end up that way?

Angelicola: “I think it was a natural process for me, perhaps subconsciously intentional, but I can’t answer that. What I can say is that I went through some big personal changes in the past six years and I was not ready to write anything for Bird Call before 2016. I’ve always found music a conduit for my healing and self-expression, so when there is an absence of it, I am experiencing life itself and not yet ready to process it through music. Logistically speaking, I moved to Los Angeles in 2017 and spent the entire year opening up my own business, a small school for creativity in Silver Lake, which I now run and operate. The record was mainly tracked towards the end of 2018 after I had finalized all of the demos and we didn’t wrap up production until the end of spring 2019. So, a number of variables were in play that impacted the length of time to make this. Pepper in a little heartache, depression, and recovery from addiction and you have yourself a few years.”

Set to be officially released tomorrow, check out the artwork for Year of The Dogfish: 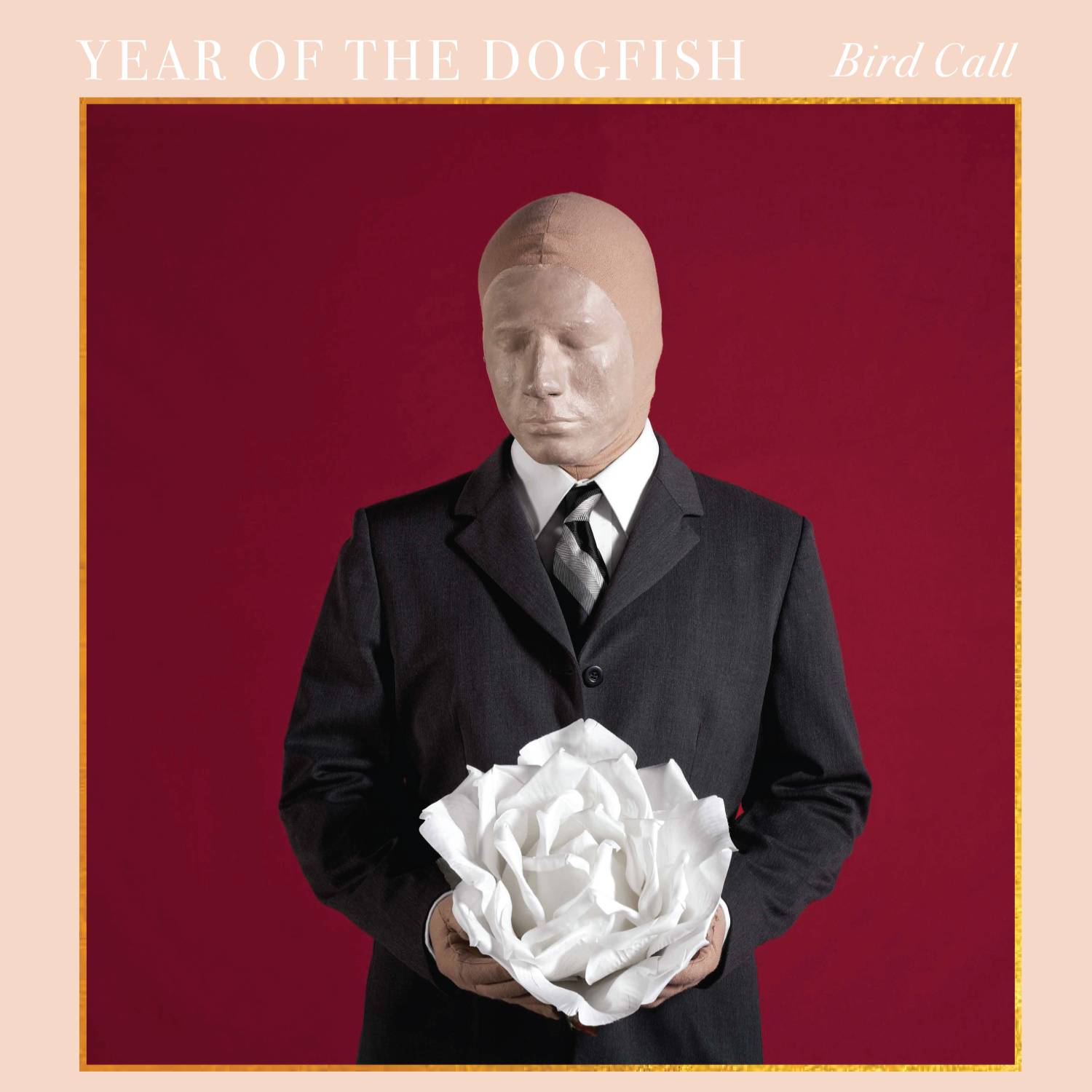 Even just from scratching the surface of Year of The Dogfish, one would infer that this record took a very long time to see through to the end. Take us through the timeline a little bit. When did you first start hashing out song ideas and how did that progress towards the finished product?

Angelicola: “The writing process is always an intuitive, slow, and natural experience. I have never forced myself to write a song. I’m grateful for that. I’ll record melodies and chord progressions on piano as they arrive, then revisit them, build on them, transpose them for arrangements, and begin programming the various instruments for demos. As natural as the demo writing process is, I like to have as much written for each song as possible, including potential mix treatments and arrangements before I go in to track the record. I began working through and teasing out the song ideas I had for YOD once I settled into LA.

I then tracked the bulk of the rhythm in New York with Gabriel Galvin at Four Foot Studios. I’ve worked with Gabe, my engineer and mixer, since the early days of Bird Call in 2010. Our friendship makes the work we do that much more cohesive and dynamic. His mixing palette and taste is impeccable and we both love the same kinds of sonic textures. He understands who I am as an artist and can convey the story I’m trying to tell very intuitively. Working in his studio creates a really warm and familial experience. His rackmount gear is literally stacked in his kitchen. I also really value and require working with people who have a history with me.

Like I said about Gabe, knowing someone and musically connecting allows for the production to sound more cohesive and authentic. I think the arrangements always translate better to the listener that way. So I chose to work with musicians I had previously recorded or toured with and would honor the parts I had already written for them while also know how to incorporate their own ideas in a really natural way. I then did several overdubs with friends across the globe and had an orchestra in Budapest track remotely for ’Get Better.’ That was such a surreal experience to be on one side of the globe listening to a live group of 30 musicians playing your arrangements in real-time. I had Patrick Brown, another long-time friend and collaborator, master the record at Different Fur Studios in my hometown of San Francisco.”

If you’ve ever wondered what ”Phantom Limbs” feels like? Bird Call can help:

Talk to us about the album; its tone, sound, feel, etc.

Angelicola: “Year of the Dogfish, the album’s namesake single most widely encompasses the spirit of the record from a sonic perspective. The goal for the arrangements on the whole record was to imbue the structurally pop songs with subtle jazz and orchestral tones, somber minimalism, and upfront vocal delivery. I also wanted to record some of the songs in a way where you would listen and feel like you were being directly spoken to in a vulnerable and intimate setting. So a lot of that approach came through catching the cracks and crackles in the piano stool, pedals, breathes between bowe strokes, and, the organic approach to mixing.

The record feels like a healthy culmination of the previous Bird Call releases and ultimately the most authentic sound I’ve identified with as an artist. I chose to begin the record with the first single ‘Year of the Dogfish’ as a way to represent the album as a whole. Lyrically, the single sets the tone for the transcendent journey I went through in the past three years… beginning with a rock bottom realization that my view of the world and my place in it had to change, rather than the people in it.”

I just wanted to end off by asking you about the gap in between Year of The Dogfish and your last record, 2013’s Will We Get To Mars. I realize you were busy with your solo project Motel Pools, but were there any other specific reasons for the fairly lengthy time you took between albums?

Angelicola: “You’re correct that between 2015-2017 I was busy writing and recording as Motel Pools. I couldn’t have fathomed writing any new Bird Call material between 2013-2017 because that’s not where my head was at. I had just left New York in ‘13 and had reached my industry threshold. I was emotionally exhausted from performing so much in NY and I felt like I needed to put Bird Call down for a while and live in the redwoods of my hometown, Mill Valley, California. It seemed the most natural thing to work on Motel Pools for that interim period before I moved to LA because I had a lot of pent up energy and resentment towards the music industry. Motel Pools was the best conduit for expressing that. When 2016 happened, I felt like the best outlet to process was Bird Call. I think I’ll always make music as Bird Call, just not on anyone’s timeline.”