Dig, if you will — back in 1968, Led Zeppelin’s first album proved ground-breaking, to say the least. Van Halen’s blistering 1978 inaugural set inspired a global rock guitar revolution. And then there was that little band from Seattle who changed the whole game with their 1991 major label premier. Since then, I can recall only ONE rock band’s debut record that has had such a profound, long-lasting and far-reaching impact.

It’s not that I have some type of drooling obsession with Taking Back Sunday. In fact, I wouldn’t know guitarists Eddie Reyes and John Nolan or bassist Shaun Cooper if they walked up and bitch-slapped me in the middle of the produce section at my local Walmart outlet. But as an old dog who’s still in the hunt, I know what I know. And my sense of smell didn’t vanish years ago along with my hairline. As a result, I’ve been sniffing around on the scene long enough to recognize that by describing Tell All Your Friends as merely a great record from a great band would be to do both a great disservice.

Truth be told, if I had a dollar for every record I’ve reviewed in the last 15+ years from a new band that’s “borrowed” stylistically from Taking Back Sunday, I wouldn’t still be making instalment payments on those Misfits tickets I bought a while back. I mean, c’mon now — do I really need to recite an A-Z list of artists who would be absent from a modern-day “red carpet” rock star roll call had there not been Taking Back Sunday to lead the way? Suffice it to say, Kevin Lyman would have had to shut down his Vans Warped Tour after 2001 — almost.

My teenage compadre was giddy about turning me on to the Jersey-based combo back in the day. Uncertain about where she was with her daily meds regimen, I didn’t know what to expect when she announced, “You GOTTA hear this,” as she popped their CD into her factory-installed car hi-fi. Simply put, I was knocked out in short order. Taking Back Sunday has since maintained a place of prominence on my personal rock radar.

To commemorate the band’s 20th anniversary, the groovy gang over at Craft Recordings has just reissued that celebrated, platinum-selling debut slab from Taking Back Sunday on 12″ vinyl. And what a beautifully enhanced, organic experience it is.

Released originally in March 2002, Tell All Your Friends was recorded at New Jersey’s Big Blue Meenie Studio in December 2001. Produced by veteran hard-core bassist, Sal Villanueva, the crisp, concise ten-track collection kicks off strong — hitting like a 20-pound sack of nails. Bursting with biting guitars and rib-cracking drums, the LP opener, “You Know How I Do,” sets the stage — oozing all the band’s heart-stopping, signature-style allure.

Despite Adam Lazzara’s acknowledged disdain for his personal vocal performance, it can be argued that the group’s powerhouse frontman is a bonafide rock star whose distinctive, urgent-sounding delivery makes these songs come alive — fueled further by Mark O’Connell’s ferocious drum work.

A promotional photo of the band circa 2002: 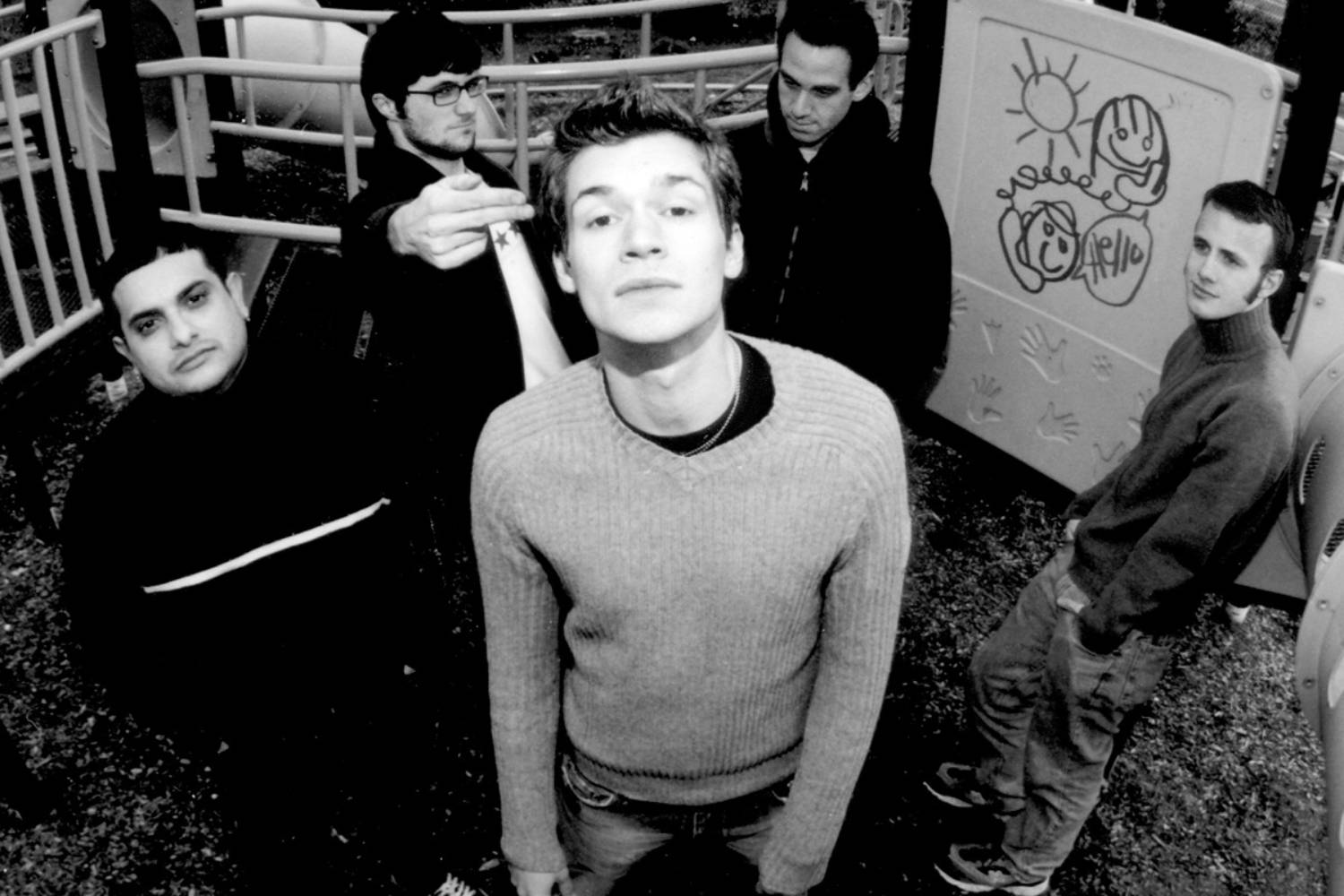 While the singles, “Great Romances of the 20th Century” and “You’re So Last Summer” remain iconic, infectious sing-alongs, I point to the emo-charged “Cute Without the ‘E’ (Cut from the Team)” and the epic-caliber “Ghost Man on Third” as personal favorites.

In sum, the title suggests, “tell all your friends.” Heck, I’ve been doing just that for nearly 20 years. And with the renewed WOW-factor of this anniversary vinyl reissue, I can’t see my enthusiasm waning anytime soon.

We think you’re even “Cute Without the ‘E’ (Cut From the Team)”: