Welcome to Planet B! If you aren’t familiar with this cutting-edge duo, Justin Pearson (Dead Cross, Retox, The Locust) and Luke Henshaw (Sonido de la Frontera) have joined together to form one of the most eclectic musical acts you’ll ever hear. The two have previously worked together in various capacities, but nothing matches what they’re currently up to with Planet B. This is an band that sets out to create original music that’s both mischievous in sound and sobering in message. Their music lays outside of regular, everyday genres, landing somewhere amongst hip-hop, hardcore punk, turntablism, and ‘70s and ‘80s horror movie soundtracks.

01. “Crustfund”
Justin Pearson: As some of life’s weirder things come to fruition, this was certainly one of them. I think there was a series of elements that led to us working with Kool Keith on the opening track of our album. The main one would be our comrade Juan Alderete, who is the bassist of Dr. Octagon. We had recently recorded one of our ‘Cult and Culture’ podcasts with Juan and got to talking and we ended up getting in touch with Keith that way. The raw track we presented to Keith, featuring one of Three One G’s broken fax machines and the track became known as “Crustfund.” It seemed to resonate with Keith, and we got to discussing lyrical content and the overall vibe of the track. We later on filmed a video in the studio to accompany the song and our collective efforts and the rest was history. However, the present tense of history on this planet seems to have more in the works with Keith and the world of Planet B.

Luke Henshaw: Yeah, this track just fell in place. It needed to be hard hitting and in yo face, and to me everyone’s delivery speaks for itself. This set the bar for the rest of the album. Whether JP and I limbo’d under that bar or pole vaulted over it is up to you. I don’t care.

The music video for “Crustfund,” featuring Kool Keith was released in October.

02. “[A] Not At All [B] Somewhat [C] Very Much”
Pearson: This was one of the earlier tracks that we put together for the album. It might be my least favorite of the bunch, but I think it serves a purpose and could be relevant. I drew lyrical influence from The Pixies’ “Where is My Mind” and tried to pay homage to one of my favorite songs, but added a spit on some of the words, making it nasty and maybe taking a direction of obvious despair with how humanity seems to be in current times.

Henshaw: Regardless of what JP says about it being his least favorite, this is one of my favorites in terms of that “light bulb over the head” moment. I had JP’s acapella and went with three or four different versions of this song, each at 112 bpm. Nothing was hitting for me, then one day I thought, “fuck, try doing half time” (56bpm, which is hella slow) and it fit. Then I ran a few kicks and a snare through the Organizer pedal from Earthquaker Devices and never looked back.

03. “Join a Cult”
Pearson: This is a redone version of the B-side from our first single. I think the initial track was possibly the first Planet B song we had written, and Luke put a fresh spin on it, giving it a new life on the new album.

Henshaw: I really wanted to have this song on the album, but since it was already released on vinyl I had to figure something out. And remix it was. This was actually the last piece of music worked on for the album and I felt the album needed something faster and so, kind of like ABC, I turned the original 80bpm into 160bpm. If you listen closely you can hear old footage of NASA films from a projector reel my buddy lent me.

04. “Disease Control”
Pearson: Out of all the collaborative efforts on our album this was the most involved pieces. I grew up listening to Sonny Kay’s bands, such as Angel Hair, The VSS, and then onto his later musical endeavors. I also worked with him for years, with The Locust being on GSL and with GSL’s distribution, Bottlenekk. Basically, Sonny and I have quite a lot of history and it was long overdue for us to work on music together. Luke and I put the bulk of the track together and I laid down some vocals before presenting it to Sonny. He hit us back with some interwoven lyrics and vocal placement that I would not have expected. It was great to hear a fresh take on a piece and have someone’s influence completely shift what we used to. It was an honor to have him be such a strong part of this track.

Henshaw: JP constantly introduces me to rad folks and is almost always late. When Sonny showed up on time though, there was no awkward silence while we waited for JP, we hit it off right away and dove into the song. To me, the kick and snare set the pace of this song, which took lots of layering as usual.

One of the standout tracks from the album is “Manure Rally,” which the band also shot a visually intense video for.

05. “Manure Rally”
Pearson: This track is about the resurgence of modern white supremacy. No more explanation needed.

Henshaw: Musically the idea came to me on a Sunday afternoon while watching a Ginger Baker documentary. I knew I wouldn’t be at the studio until Monday morning, so the only way for me to remember the idea was to record myself singing the rhythm. I grabbed my phone and recorded myself playing the drums with my mouth, then I played the baseline on my nylon string guitar and recorded that too. I spent the next morning searching for the right sounds and built it hoping JP would like it. The Quincy Jones sample just had to be in there.

06. “Mirror, Mirror, On the Wall”
Pearson: Timing isn’t everything, but it’s certainly important with a lot of stuff in our lives. I think this track, which has a linear feel, is more of a story than a song. It has managed to avoid your typical chorus/verse structure, specifically with the lyrics and vocal placement. It centers on the narrative, which is me, or the main character, arguing with a rude algorithm, and tells a story of how the main character, who has a (good) bad attitude, fights against oppressive forces, and then lets the listener know that we are still fucking up this world that we live in.

Henshaw: The rhythm is in 7/4. I was trying to break out of the box a little. I had been working on this, but when JP came in the studio I was kind of embarrassed to show him this, it felt goofy to me, but I said fuck it and hit play. He immediately said “Let’s use this,” so I made sure to save it and not toss it like a lot of stuff I do.

The new self-titled ablum from Planet B is out now via Ipecac Recordings. 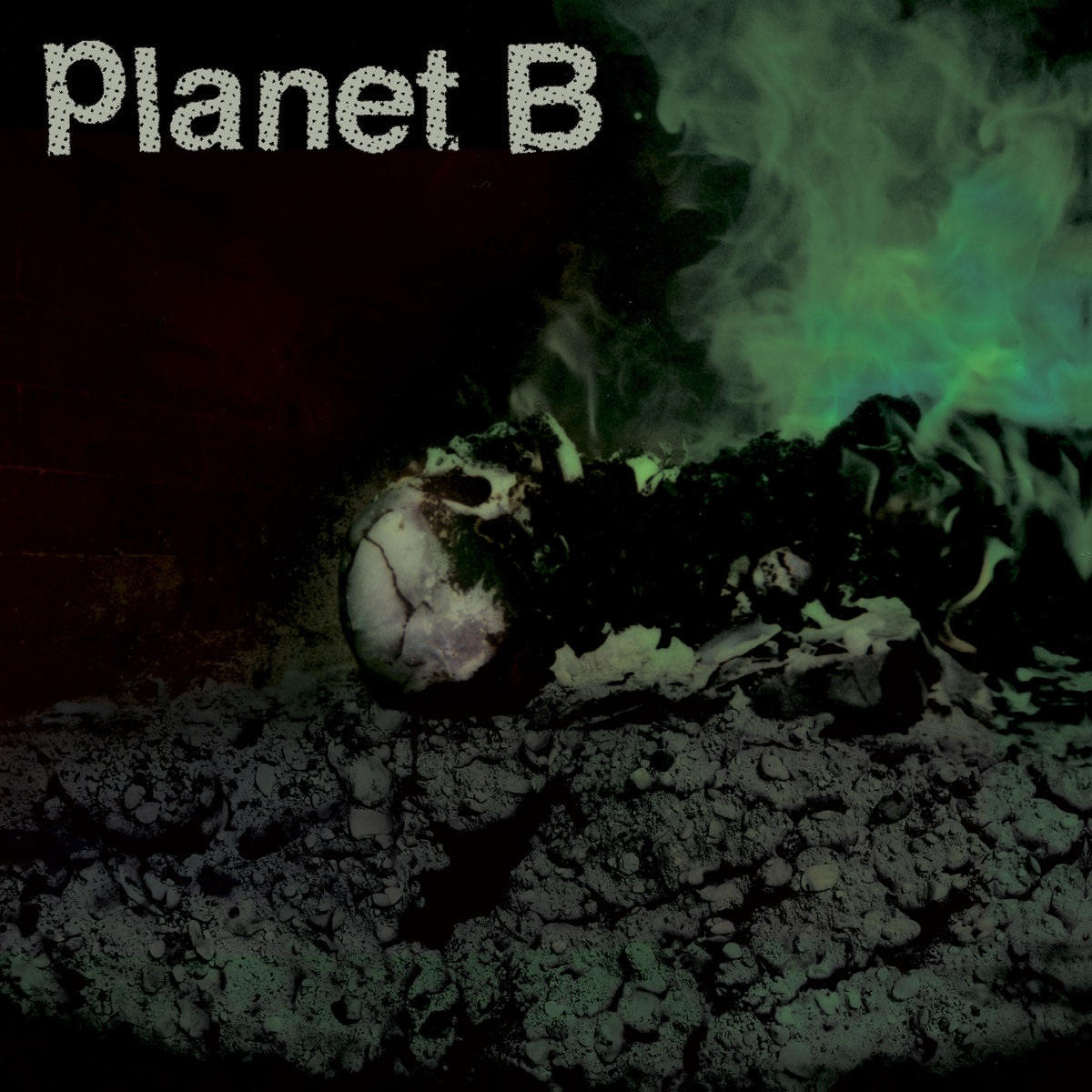 07. “Big Karma”
Pearson: For me, having Joseph Karam on a track was a lot along the lines of working with Sonny Kay. My musical relationship with Joey has pretty much been limited to The Locust over the last couple decades. So it was really great to have him work with Luke and me on this track, outside of what he and I have done so far. Joey was very involved in the writing of this song, which was great to have him come to the studio to work on things with us. It was also interesting to approach the song lyrical from Joey’s standpoint, which I ended up adding lyrics and doubling up on some of his lines as well.

Henshaw: Again, here is another example of JP introducing me to someone rad. Joey and I met before we worked on this track, and he agreed to work with us, but we kept trying to figure out what we’d work on. I thought I had this whole song figured out. Then Joey took it home, drove back from LA, stopped in San Clemente to surf, then met us at the studio with his ideas.

08. “Brutal Evolution”
Pearson: Lyrically this song comes from a religious point of reference. Most organized religions have stated that end times were approaching and have since past, however, we are still here and still apply these teachings to everyday life. Humans have and still do focus on political leaders, which appoint social dogma that directs people’s life choices. Throw in gun control issues, systematically oppressive policing, the media, and whatever else… which all ties into religion in some weird ass-backwards way and you have modern society in America.

Henshaw: The evolution of this song was brutal. It went through so many changes. Probably the most on this album. Nothing was sticking, but I loved JP’s lyrics and his stance on organized religion, so I wanted something more impactful. One night I was on Instagram and Jake Najor had posted a video of him playing a beat with only a kick and a snare. I hooked up my phone to my MPC and sampled it, then layered it over and over again. Jake approved and so did JP. The cherry on top of this song to me is JPs delivery, so reminiscent of old-school hip-hop.

Here’s the video for the very scary “Come Boogeyman” off of the new record.

09. “Never Let Me Down Again”
Pearson: This cover was initially suggested by Gabe Serbian. I have not done heroin, yet. However, I love the original and Depeche Mode has made a place in a lot of our lives as a soundtrack to our world.

Henshaw: We were trying to figure out a song to cover for the Ghost Ship benefit comp and I believe Gabe (who also played synth bass on this) overheard the song in the restaurant he was having dinner at. He sent a group text and we agreed to do it. When we were tracking JP’s voice, he came up with the idea to ask Nick Zinner if he’d like to be a part of it. I think he’d text him while in the booth and we sent him a rough version and Nick agreed to clean up our mess before JP was done with his vocals.

10. “Come Bogeyman”
Pearson: This track started with Martin Atkins’ drum track and Luke built around it.

11. “The Beginning Is Near”
Pearson: Lyrically and maybe musically this is my favorite track on the album. I suppose it is the concept of creating something from nothing which has been a common theme in my life, in most things I take part in voluntary and involuntary. The title came from the idea that we have always imagined a world that is possible, which seems obvious or relevant. However, there is a world that we can try to create that has yet to exist, and possibly one that is practical and full of shit. Is the end near, or a new beginning?

Henshaw: This one was a lot of fun. I had Gabe in the booth and hit record. While he was recording I quietly stepped out and walked to the liquor store to grab us a beer. When I came back he had about five or six different drum beats recorded. I spend the next day putting them all together and layered a bunch of percussion with my MPC. You can even hear my clicker and my metronome app in the background. This track is by far my favorite from a percussion standpoint.