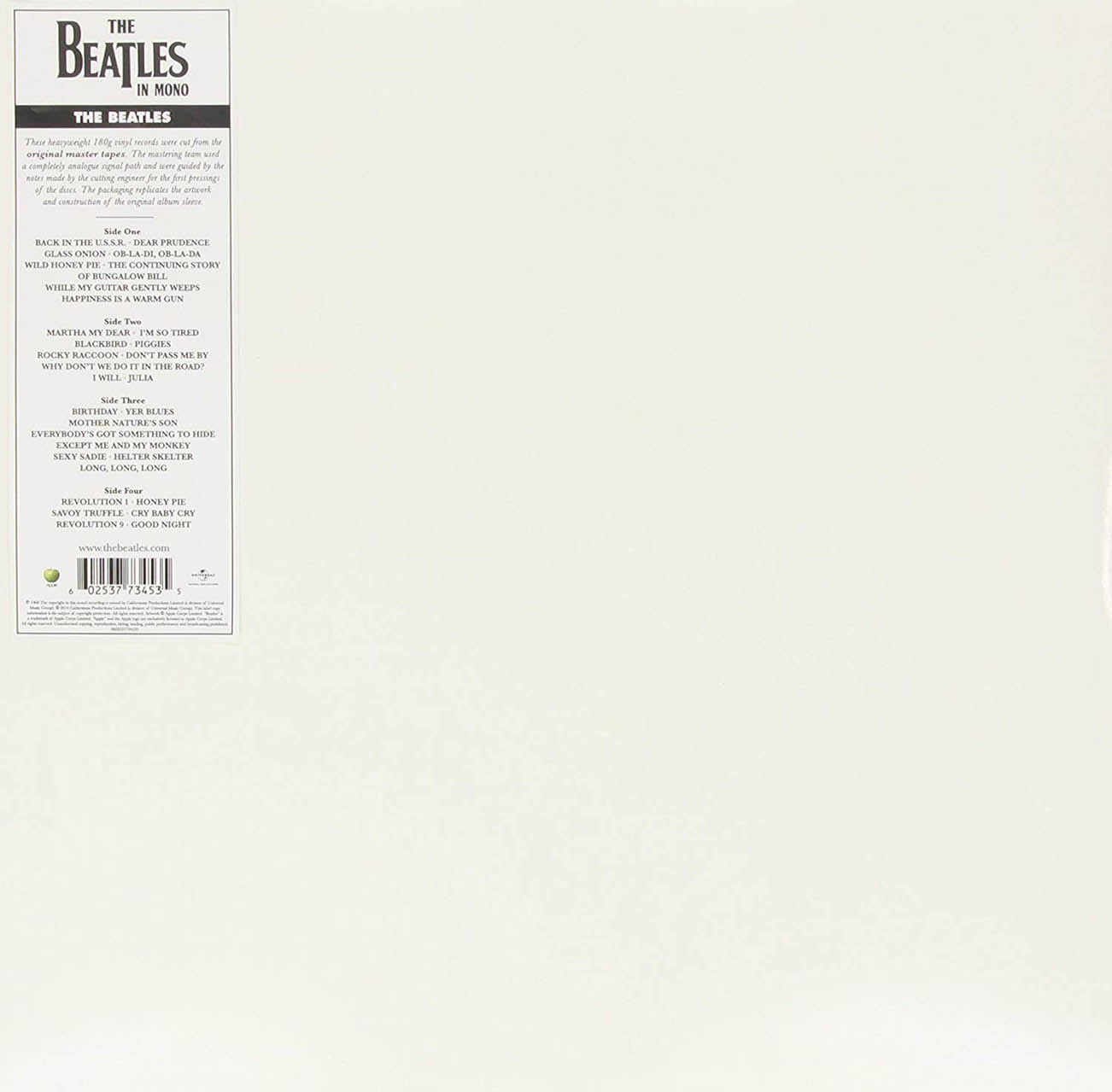 In turn, as one of the United States’ remaining 3 “major labels,” UMG can regularly be counted on for top-tier re-issues featuring interesting archival material. Just in time for the 2018 holiday season, below is a look at 5 recent vinyl re-issues from Universal.

01. The Beatles – The White Album
– In November 1968, millions of double LPs were shipped to record stores worldwide ahead of that tumultuous year’s most anticipated music event: the November 22nd release of The BEATLES (soon to be better known as “The White Album”). In turn, with their ninth studio album, The Beatles took the world on a whole new trip.

On November 9th, The Beatles released a suite of lavishly-presented White Album packages. The album’s tracks were newly mixed by producer Giles Martin and mix engineer Sam Okell in stereo and 5.1 surround audio, as joined by 27 early acoustic demos and 50 session takes, most of which are previously-unreleased in any form. Simply put, this is the first time the White Album has been remixed and presented with additional demos and session recordings; Martin’s new mix is guided by the album’s original stereo mix produced by his father George Martin.

Giles Martin opens up about The White Album.

02. The Bee Gees – Timeless: The All-Time Greatest Hits
– Having recorded 22 studio albums and for numerous soundtracks, The Bee Gees infused popular culture with dozens of worldwide hit singles that featured their singular and highly influential three-part harmonies. They achieved 9 #1 singles and 23 Top 10 singles on the Billboard Hot 100 chart, including “How Deep Is Your Love,” “Night Fever,” and “Stayin’ Alive” from Saturday Night Fever, and graced charts around the world with many other classics, including “How Can You Mend A Broken Heart,” “I Started A Joke,” “Lonely Days,” “Words,” and “You Win Again.”

A trailer for Timeless by The Bee Gees.

Christmas with The Chipmunks Vol. 2 was released in 1963 as the follow-up to the Chipmunks’ first Christmas album, released the previous year. Reissued on limited-edition white vinyl, this album features 11 traditional holiday songs and one original composition by Ross Bagdasarian, Sr. Personally, I hope that Chipmunk Punk — as released on June 15, 1980 — is also slated for a vinyl re-release in the near-future.

04. James Brown – Black Caesar
– Multiple generations of music fans known James Brown as “The Godfather Of Soul.” But Brown did have plenty of deep cuts in his catalog, and his original soundtrack albums for the early 1970s blaxploitation films Black Caesar and Slaughter’s Big Rip-Off fall into that category. Both of those titles were reissued last month on 150-gram vinyl LPs by UMG with tip-on jackets and faithfully replicated artwork.

Originally released in February 1973, Black Caesar is a gangster drama set in Harlem, written and directed by Larry Cohen and starring Fred Williamson, Gloria Hendry, D’Urville Martin, and Julius Harris. The film’s script was originally commissioned by Sammy Davis Jr., who was ultimately unavailable to participate in the production, and its original score was James Brown’s first foray into writing music for the screen. Pieces of Brown’s soundtrack, which also features the J.B.’s and Lyn Collins, have since been notably sampled in tracks by top rap artists, including “The Boss,” sampled by Ice-T in “You Played Yourself,” by Trick Daddy in “Take It To Da House,” and by Nas in “Get Down,” among others.

In addition to these two vinyl soundtrack reissues, seven sought-after, James Brown-produced albums from members of his revue are now available for the first time for streaming and download purchase. From Bobby Byrd, Brown’s longtime right-hand man, is his debut album I Need Help, featuring a slate of hit singles and sampled favorites, including the title song and “You Got To Have A Job (If You Don’t Work You Can’t Eat).” From Brown’s backing band led by Fred Wesley — credited to “Fred & The New J.B.’s” — is the 1974 album Breakin’ Bread, highlighted by the title song and “Rockin’ Funky Watergate,” and Maceo Parker’s solo debut album, Us, led by the hit “Soul Power ’74.” In addition, there is Marva Whitney‘s It’s My Thing, as originally released late 1969, Lyn Collins with two albums, 1972’s Think (About It) and 1975’s Check Me Out If You Don’t Know Me By Now, and “Sweet” Charles Sherrell‘s For Sweet People From Sweet Charles from 1974.

Only The Lonely itself was recorded as both a mono and stereo presentation. The mono was the focus as that was the chief format of the day. The stereo was recorded with two microphones suspended high over the studio orchestra. Frank Sinatra’s voice was recorded onto a third track. With the stereo recording being mid-side decoded, the depth of the studio is revealed. Only The Lonely reached #1 on Billboard’s albums chart and remained on the charts for 120 weeks. At 1959’s inaugural GRAMMY® Awards ceremony, the album won the award for “Best Recording Package.”

A “Mini-Mix” of Frank Sinatra Sings For Only The Lonely.