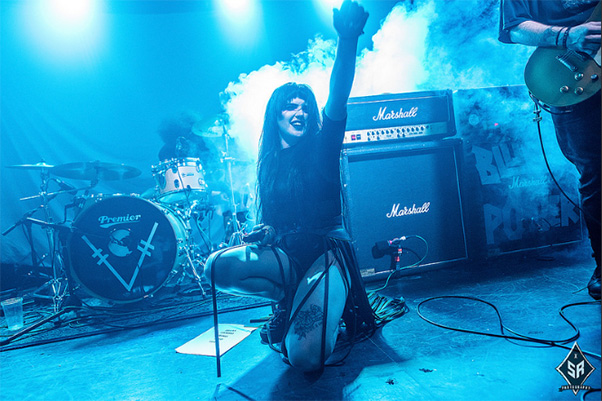 Ask someone to describe a rock club and they’d probably come up with something like Manchester’s Rebellion Bar which makes it the perfect setting for this three band feast of dirty riffs.

The night kicks off with local boys Nomad who wake up an impressive number of fans who’ve turned out early to catch the sludge outfit. Having already opened for the likes of Eyehategod in recent months, the band deliver exactly the kind of punishing, Sabbath-influenced heaviness you’d expect from them. Inspired by the likes of Royal Blood, Halestorm and Iron MaidenVoodoo Blood add a dash of melodic, blues-inspired rock to the proceedings and, while they’re don’t shake the foundations in the same was as Nomad did before them, the female-fronted rockers and, in particular, vocalist Kim, made sure they had the crowds undivided attention for the duration of their time on stage.

Closing this three-band bill are headliners London three-piece Vodun who describe their sound as “heavy, weird and soulful”. Honestly, watching the band rock through their set, it’s hard to find a better description for the London outfit who make their mark on a crowd who nod along appreciatively to their melodic doom rock. As their set progresses in the dark confines of the Rebellion Bar, the crowd soak up the melodic riffs which fill the room as Vodun make sure that, given the quality that has gone on before them, they deliver a set fit for their headliner status.

Vodun summon “Spirits Past” in their recent music video: