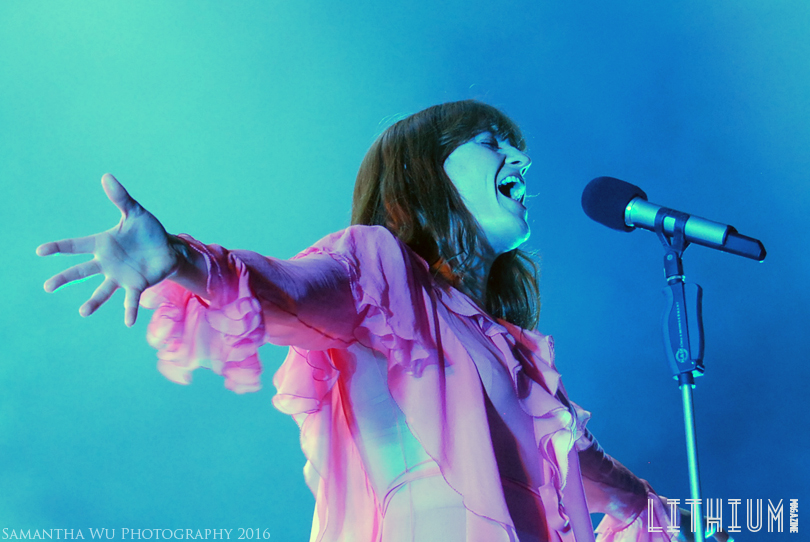 Florence + The Machine brought their cinematic How Big, How Blue, How Beautiful tour to Toronto’s Molson Canadian Amphitheatre this past Friday Night.

As dusk settled in, Florence Welch and her massive backing band commanded both the stage and the sold-out crowd.  In bare feet and never skipping a beat, Welch danced, leapt and twirled her way throughout the set which lasted over an hour and a half.   She performed material from both her past albums and current release including Dog Days Are Over, What The Water Gave Me, Shake It Out, Ship To Wreck and You’ve Got The Love.  If I even have an ounce of the passion and creativity that Welch has, I’ll consider myself lucky.  It was one of the most raw and vulnerable performances I’ve ever seen.

Someone who’s not shy of interaction, Welch performed Rabbit Heart in the audience (which ranged in age from teens to seniors and speaks volumes about the vast appeal of her work) high-fived and hugged fans, threw flowers to the crowd, and shared thoughts in between songs.  Given the way in which the audience reacted, it almost seemed akin to a spiritual experience.

A personal highlight for me was when Welch asked the entire audience to put their phones away for her performance of single How Big, How Blue, How Beautiful. In a generation where everything is Instagrammed it was refreshing to be surrounded by so many respectful people living in the moment and not through their screens.

I also really enjoyed her much-in-demand, encore performance of What Kind Of Man, one of her most rock-esque tracks, and a personal fave of mine.  It left the audience on a high note.

I’ve wanted to see Florence + The Machine for many years and they did not disappoint.  It was definitely my favorite show of 2016 so far.