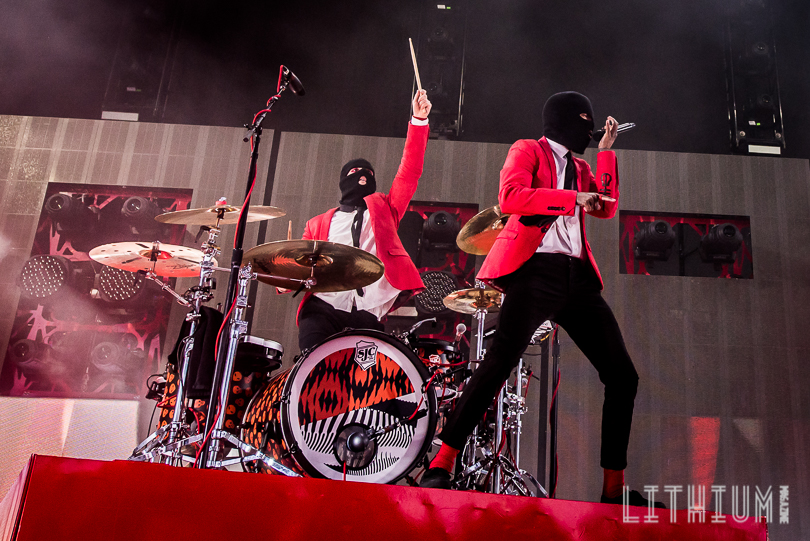 This past Tuesday night saw the opening show at the Molson Canadian Amphitheatre for the 2016 concert season.  And what a show it was.  Ohio powerhouse duo Twenty One Pilots brought their high-energy show to a rammed-to-the-fence SOLD OUT crowd of all ages, but with a clearly younger female slant.  Hitting the stage in their trademark black ski masks, drummer Josh Dun and multi-instrumentalist Tyler Joseph opened with “Heavydirtysoul” from their current release Blurryface, as the crowd roared their approval.  Joseph has a clean, rocket speed vocal rap style reminiscent of hip-hop godfather Eminem, but also works a versatile melodic vox repertoire into their songs.  He spends much of his time behind his vintage upright piano and, without missing a beat, jumps from the risers while doing backflips and all manner of acrobatics.

Dun has an infectious drumming style that keeps your attention fixed squarely on him if Joseph is not stealing the show at that moment.  Equal parts Blink-182’s Travis Barker and Foo Fighters Dave Grohl, with a dash of Metallica’s Lars Ulrich thrown in, make Dun a monster behind whatever kit or drum he is working.
One standout of the show was “The Judge” with Joseph strumming away his part on a ukulele.  They successfully meld whatever instruments they want into their music, sometimes with odd but satisfying results.   Part way through the show the pair made their way through the crowd to the back of the 400 section of seats, right in front of the GA lawn section for an up-close experience for the “cheap seats” in the house.  A compact drum kit and piano was set up complete with lights and C02 blasters to add to the effect, like a mini version of what was happening on the big stage.  They seem to be very conscious of making sure their fans have an exceptional experience no matter where they are in the venue.

The band plays a diverse collection of cover songs on tour as well.  Some might say that a couple of those covers are within the wrong demographic of their fans, notably, Elvis Presley’s “Can’t Help Falling in Love” and Celine Dion’s “My Heart Will Go On”, but the fans accepted them with the enthusiasm they had for the Pilots’ tune as well.  Crowd favourite covers were Justin Bieber’s “Love Yourself” and House of Pain’s “Jump Around” with Darren King from opening band Mutemath on drums.

Joseph and Dun together put part explosive EDM lightshow, part rap show and part Coldplay piano style completing it all with 110% energy and expertise at their instruments.  The last song of the main set was “Car Radio” from their Vessel release, and saw much of the audience holding up “Fear will Lose” signs from the song’s lyrics, along with their smartphone flashlights which was an impressive sight.  Joseph made his way to the middle of the venue and popped up on a single person scaffold high above the crowd for the part of the song.

The two-song encore began with the soulfully performed piano anthem “Goner” from Blurryface.  A single spotlight trained on Joseph and his piano, and the rest of the venue was completely lit up with phone lights.  “Trees” from Vessel closed the show and as the song moved steadily higher, the pair moved to playing large drums at the front of the stage while confetti cannons, CO2 jets and a torrent of lights assaulted the senses.  Money’s worth comes to mind when you see a band leave it all onstage every night like these guys do.